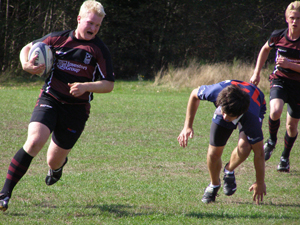 Connor Willis is set to become Courtenay’s second full rugby international. The sixteen year-old Vanier centre received a call recently naming him to Canada’s U-17 squad which is set to go on tour to Santa Barbara, California where it will play two games, one a full test against the All-American High School team. Last year Willis played for the Canada’s U-17 “B” domestic squad that played on a three-game tour around B.C., but this year won elevation to the “A” international squad following a four-day long selection camp held at Shawnigan Lake School three weeks ago.

“It’s awesome,” says the normally reserved Willis. “The great thing about being selected for this trip to California, just after Christmas, is that next spring, if I can hold my place on the team, the Canada squad is going on a trip to England and I would love to go on that tour.”
Willis began playing rugby at Lake Trail School and honed his skills with the Comox Valley Investors Group Kickers U-17 team last year, where he led the team to an 8-2 record scoring over a third of his team’s total points with fourteen tries, thirty conversions and a drop-goal for 133 points. That showing saw him win a berth on the 2009 North Island Tsunami Selects and to the B.C U-17 team that won Gold at the Summer Games in Ontario. Later in the fall he won selection to the Canada “B” U-17 team.
This past summer Willis again played for B.C. in the National Summer Games winning Silver in a loss to Ontario, and his outstanding performances earned him a berth at the Shawnigan Lake Canada Trail Camp.
Following a full year of rugby, this past fall, Willis took time away from the game to play gridiron football where he featured as a running back, but he intends returning to play rugby for the Investors Group Kickers next fall. “I think I enjoy rugby more. I just wanted to try football for a change. Nevertheless, I kept up with rugby in a rugby class at Vanier and I’ve been in the gym doing weights and am a lot fitter now than I was last year. The rugby coach, Mr. Erickson, has been a great help to me,” says the Grade 10 student.
Twenty-five years ago another Vanier graduate, #8 John Robertsen, won his first of twelve caps against Australia for Canada’s Senior Men’s team and later went on to play in two Rugby World Cups, in 1987 and 1991. More recently another Vanier grad, Jake Osborne, won a number of Sevens caps for Canada from 2002-2004 and more recently Thyssen De Goede is a current member of the Canada Sevens team.Connor played three games against B.C.’s Regional U-17 teams last year and was a standout,” says Jim Delaney Canada’s U-17 coach. “We seriously considered him, as a fifteen year-old, for last year’s final squad for the Wellington Rugby Festival in the UK. Connor has again been selected because of his ability to carry the ball forward and stay on his feet and this compliments the style of play we endeavour to play. He is a powerful athlete with a positive approach and a desire to work hard towards his goals. He will definitely figure in the final selection for this year’s Wellington College Festival in the UK at Easter 2011.”
“Unfortunately, all this comes at a price,” says Connor. “It will cost $2000 to go to California and even more to go to England, so I’m looking for a part-time job at the moment.”
Anyone who would like to assist Connor realise his dream of becoming a Canadian International can contact Colin Chappell, the Comox Valley Kickers’ Director of Rugby on 250-207-1125.