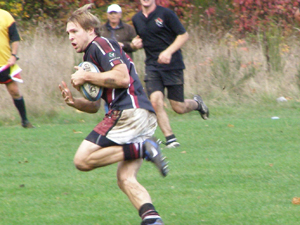 The Comox Valley Kickers traveled to Victoria on Saturday and though the team encountered snow on the way down Island to play the Castaway-Wanderers in the final game of the fall season, once they arrived they found temperatures hovering just above the freezing mark but Windsor Park was free of snow and ready for action.
After a testing out period the Kickers began dominating play and early in the first half centre Steve Hextall continued his three-game, try-scoring streak when his hard running carried him through a number of tackles and saw him go over for his team-leading ninth of the season to give the visitors a 5-0 lead going into the half.

In the second-half the Kickers continued to force their will on the game with the forwards rucking and mauling to effect. This allowed rookie lock Jake Nessman to score his first in a Kickers jersey when he took a ball from the side of a maul and bulldozed his way over the line: 10-0.
Dynamic prop Leigh Burley, capping yet another sterling performance for the club, found himself on left wing at the end of a breathtaking rush by the forwards. He took the final pass to go over unscathed following a ten metre run: 15-0.
With the game well in hand and with the visitors relishing warm showers, the home team managed a later try on the last play of the game. Final: 15-5.
The win sees the Kickers finish the Fall League schedule in second-place with a 5-3 record pitting them against Velox-Valhallians — weather permitting — next weekend in Victoria in the first round of the play-offs.
“Because of the cold, the referee only played twenty-minute halves,” said Kicker Manager Aaron L’Arivee. “But even with a shortened game the Kickers imposed themselves early and continued to dominate proceedings. We were worthy winners. Hextall and Burley continue to lead from the front and are an inspiration to the rest of the team. It was nice to see Jake Nessman score. He’s been a fine addition to the club this season and we look forward to seeing a lot more from him.”
The Women’s team did not play on Saturday. They have earned a play-off berth and, like the Men, play Velox-Valhallians next weekend.
SIDELINES:
The Kickers Rugby Club invites all those who are interested in playing rugby to attend training sessions on Tuesday and Thursday evenings at the club’s Fallen Alders facility on the Royston/Cumberland Road. Junior players take to the field at 5.30 p.m. and the Men and Women at 6.30 p.m.
The Kickers gratefully acknowledges our sponsors: The Butcher's Block, Central Rentals, Continual Palingenesis - Social Media Solutions, Investors Group, The Le Fevre Property Group, Mount Washington Alpine Resort, Wedler Engineering, Pilon Tools and without whose support rugby would not continue to flourish in the Comox Valley.