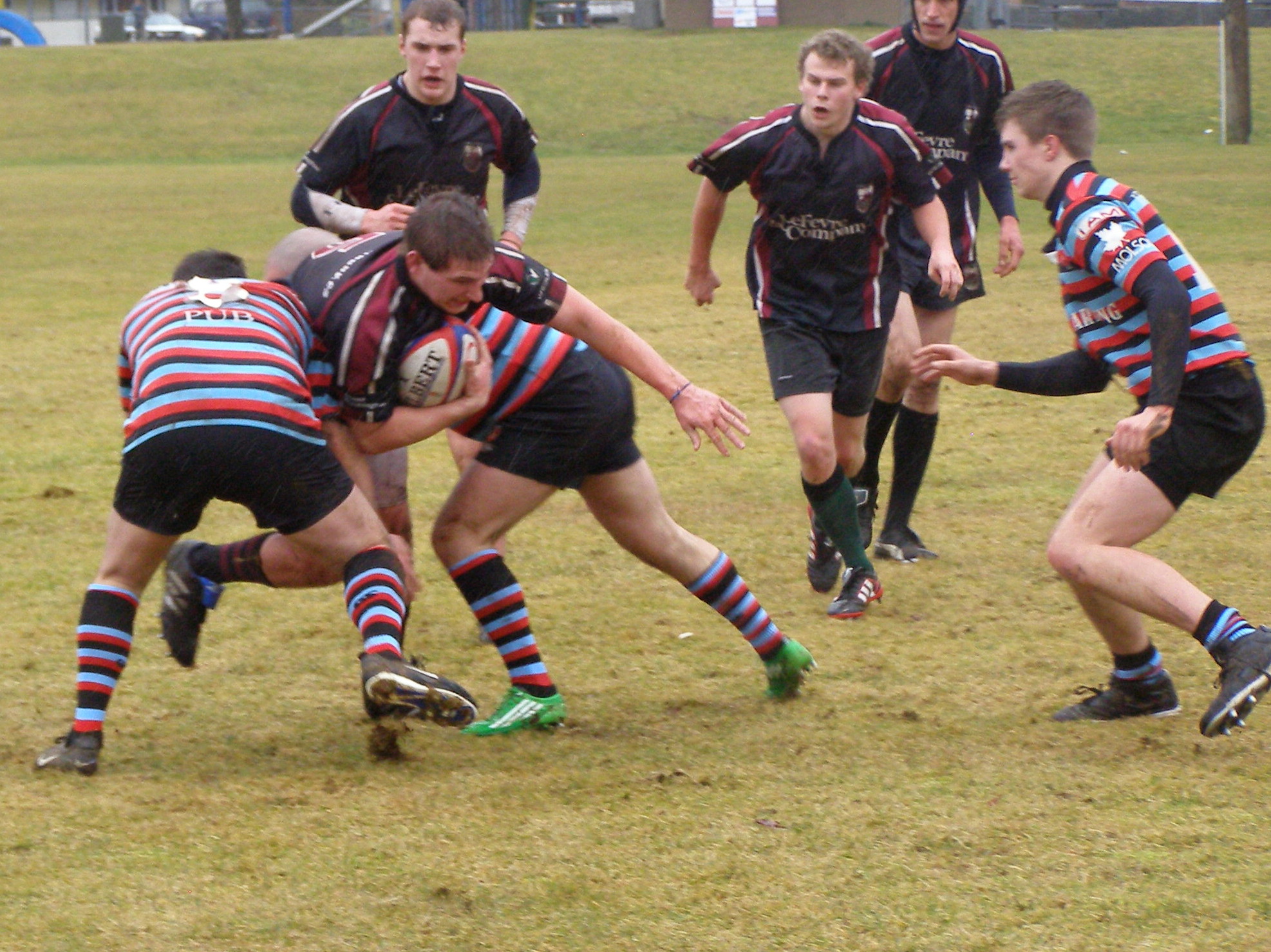 The AFC Comox Valley Kickers survived a late onslaught from the visiting Castaway-Wanderers to hang on to a 15-12 score-line and record another win on Sunday at Cumberland’s Village Park. The Kickers took a 15-0 lead into the last quarter of the match and looked confident of a whitewash victory until the Victoria based, C-W team mounted a late surge that almost won them the game forcing the home side to make some game-saving, goal-line stands to keep the surging visitors at bay. The Kickers just managed to hold off the surge and record their third win of the new Spring schedule.
From the outset, despite the wet conditions, both teams tried to play running rugby and, to their credit, both sides managed to handle the slippery ball with a minimum of knock-ons. The tackling from both sides proved aggressive and committed breaking up scoring attempts and it took until twenty minutes into the game before Andrew Hextall broke the impasse when he finished off in the corner for his first of the day. A little while later, not to be outdone, his brother Steve scooped up a ball at the edge of a ruck and sprinted forty metres to make it 10-0 for the home side at half-time.
The younger Hextall, Andrew, opened the second-half scoring when he romped thirty-metres to score wide out and give the home side a comfortable 15-0 lead. The Kickers, however, earned their second yellow card of the game forcing them to play with fourteen men for ten minutes, and C-W took full advantage putting Kevin Smith over for a try that Zak Barwin converted: 15-7. Buoyed by this score the visitors mounted attack after attack and it took some desperate goal-line tackling from the Kickers to prevent further scores. Eventually Matt Gordon went over bringing the score to 15-12 with only a few minutes remaining. The Kickers sensibly controlled the ball for the remaining time preventing any further scoring to record the victory.
“We really enjoyed the game today,” said former Canada player Spencer Robinson who captained the Castaway-Wanderers side. “There was lots of spirited play from the Kickers and I’m proud of the way my team played. In our team we try to mix experienced old guys — like myself — with younger players in order to try and pass on the rugby lessons we have learned over the years. They would have learned today that we should have found the form we showed at the end of the match much, much earlier for if we had we might have won the game today.”
“ Castaway-Wanderers provided us with a very competitive game today, the kind of games we need to improve our overall performance,” offered Kickers assistant-coach Frank Balcombe. “We weren’t as cohesive as we might have been today and didn’t get quick enough ball at the breakdown that would have helped our backs move the ball with more speed and pace.”
Andrew Hextall, who has scored four tries in his last two game, says that playing seven years of school rugby back in his native Coventry and being selected for Warwickshire County side at the U-17 level, gave him a good grounding in the game. “When I first came to Canada I thought I would like to go to Victoria and try and play senior rugby, but I’m having too much fun playing here in the Valley with the Kickers and alongside my brother. Steve and I have a healthy rivalry and next year I intend to start scoring tries earlier in the season and see if I can’t beat him in the try-scoring race.” At the moment Andrew has touched down eight times and Steve, seventeen times.
As well as the Hextall brothers, rookie prop Logan Buchanan continues to impress with his overall play, always looking for work and using the ball intelligently when he gets it in hand. Veteran Jeremy Grootendorst adds experience to the pack winning clean line-out ball and making the “hard yards’ when the game requires it. Hooker Kyle Christensen earned “Man of the Match” honors as voted on by the visiting Castaway-Wanderers.
The Kickers take on the Cowichan Piggies at Herd Road in Duncan next weekend as they look to extend their early season winning streak alive.
SIDELINES:
The Kickers Rugby Club invites all those who are interested in playing rugby to attend training sessions on Tuesday and Thursday evenings at the club’s Fallen Alders facility on the Royston/Cumberland Road. Junior players take to the field at 5.30 p.m. and the Men and Women at 6.30 p.m.

Trevor McGuire fights through some Castaway-Wanderers as he goes for the line.