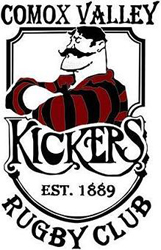 The Comox Valley Kickers RFC recently held their Annual General Meeting at the Fallen Alders Community Hall in Royston, the location of their current clubhouse.

President Andrew Eaton applauded the Kickers Mens and those Kickers Women who played for both the Kickers and Nanaimo on a job well done. He also thanked the executive, spouses and partners for their ongoing hard work and devotion to the club.

The future looks bright for the Kickers. An element of note was that a new disciplinary process was ratified by the members.

The newly elected executive consists of:

A wonderful meal was prepared by Shayne & Andrea of Coastal Trek Health & Fitness Resort and Konrad Nikkel, which was enjoyed by all.

Annual award winners were announced next and all were well deserved. They included:

Click here to view the main presentation from the AGM.

The evening concluded with a fine slide show & talk by “mystery speaker,” our own Ian Kennedy who provided an inside account of life inside our national rugby side booth while training and on tour. Many thanks to Ian for the many insights.

The Kickers Rugby Club invites all those men and women interested in playing rugby to attend training sessions on Thursday evenings at 6.30 p.m. at the Lower Lake Trail Field. For more info, visit our website at http://kickersrugby.ca.

The club gratefully acknowledges our team sponsors, AFC Construction, and Investors Group   along with our club sponsors Wedler Engineering;  andContinual Palingenesis – Social Media Solutions. Many thanks also to Bayview Chiropractic, Cummins Fencing and Green Earth Carpet Cleaning, as well as Mt. Washington for their support. Without this community support rugby would not continue to flourish in the Comox Valley.