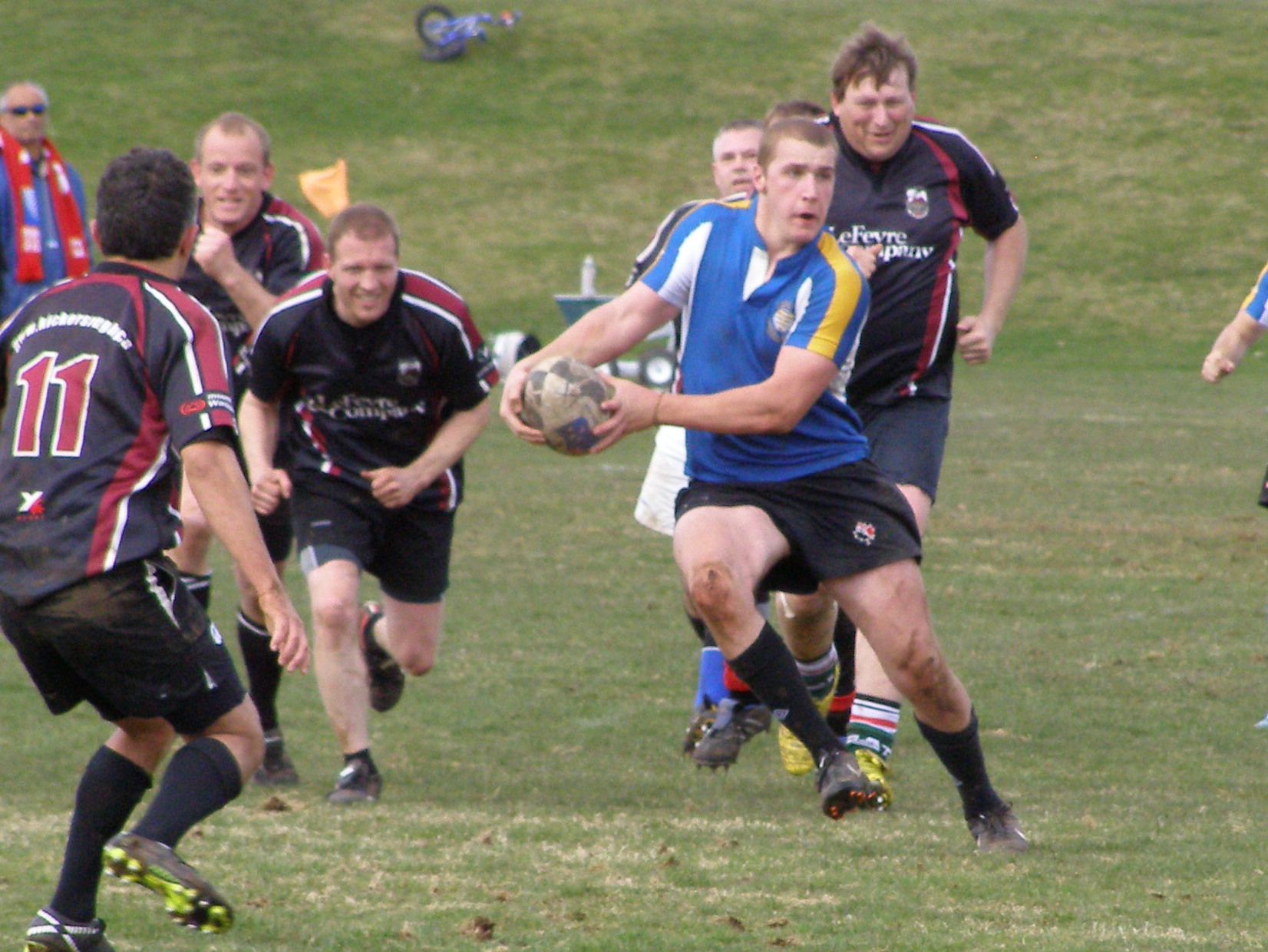 Vince Bennett in full flight on his way to the try-line.

In last weekend’s match against the Powell River Otagos, the younger members of the AFC Comox Valley Kickers shone in a win that put the club back on track after two recent losses. The club had traveled to Victoria the past two weekends losing 32-28 to the Castaway-Wanderers and 35-7 to the Velox-Valhallians, but the win over Powell River leaves the Kickers in second place in the standings with two weeks to prepare for the playoffs. They will face Cowichan at Cumberland’s Village park on April 8th @ 1p.m.

This spring season has seen an influx of eager young players to the club, some of them like eighteen year-old Vince Bennett, still a student at Mark Isfeld school, electrified the crowd with a hat-trick of tries against the Powell River visitors on Sunday. Bennett who stands 6’ 2” and weights 215 pounds, plays #8 for his school team and lock for the Kickers, and when he gets the ball in hand and works up a head of steam he is difficult man to stop. His sidesteps and jinks would make any back-fielder proud. “ I love running with the ball in hand,” comments the talented youngster who looks forward to his second game of the week playing for his school side on Thursday.

Nineteen year-old Curtis Parker graduated from Isfeld last year and can play anywhere in the backs. Though he has only been playing the game for a couple of years, he enjoys the contact and running with the ball in hand. He has notched a couple of tries this Spring season and is looking more comfortable with each game he plays.

Eighteen year-old Trevor McGuire, a recent graduate of Vanier’s rugby program, is another fine physical specimen who stands over six feet and can play lock or front-row. With six years of experience behind him since he began playing at Cumberland Elementary back in grade eight, he has progressed through the Kickers Junior program and now enjoys playing, and making an impact for the senior men’s side.

Prop Alister McArthur is another Vanier graduate who has been with the club for a number of years, but this year has begun to make a real impact. Strong and nimble he holds his own in the set pieces and still gets around the park to make his presence know at the breakdowns.

Brad Hanna, along with other recent additions to the club (scrum-half Damien Kodoba, hooker Brandon Robertson and wing Troy Mader) all travel down from Campbell River twice a week to practise and play. “I just absolutely love the game,” says the flanker who creates havoc with his pace and tackling. “I went to Vancouver for two years after I graduated and couldn’t play because I couldn’t afford the club dues down there. Burnaby wanted $300 to play and the Capilano’s $500, which I couldn’t afford on a student’s lifestyle. Now I’m delighted to be back and playing here with the Kickers,” said the winner of a number of “Man of the Match” honors this season.

Hooker Brandon Robertson, who scored a try against Powell River on Sunday, graduated from Timberline School in Campbell River. He came out earlier this year and is enjoying learning the nuances of playing hooker. “I used to play flanker, but they needed me to play hooker and I’m enjoying the challenge. The Kickers is a great club and they are a great bunch of guys.”

Coach Aaron L’Arrivee is delighted with this influx of new players. “Today we had sixteen players under thirty years-old ready to play at the kick-off. These young guys are the future of the club and as some of our older guys retire, they will become the starters. Some are still a bit green behind the ears, but they are enthusiastic and are pushing the older players for places. It is very positive indeed and bodes well for the future of the club.”

SIDELINES:
The Kickers Rugby Club invites all those men and women interested in playing rugby to attend training sessions on Thursday evenings at 6.30 p.m. at the club’s Fallen Alders facility on the Royston/Cumberland Road. For more info, visit our website at http://kickersrugby.ca.

The club gratefully acknowledges our team sponsors, AFC Construction, and Investors Group   along with our club sponsors Wedler Engineering;  and Continual Palingenesis – Social Media Solutions. Many thanks also to Bayview Chiropractic, Cummins Fencing and Green Earth Carpet Cleaning, as well as Mt. Washington for their support. Without this community support rugby would not continue to flourish in the Comox Valley.

Mike Magee going in for his try.