GIVING BACK TO THE GAME 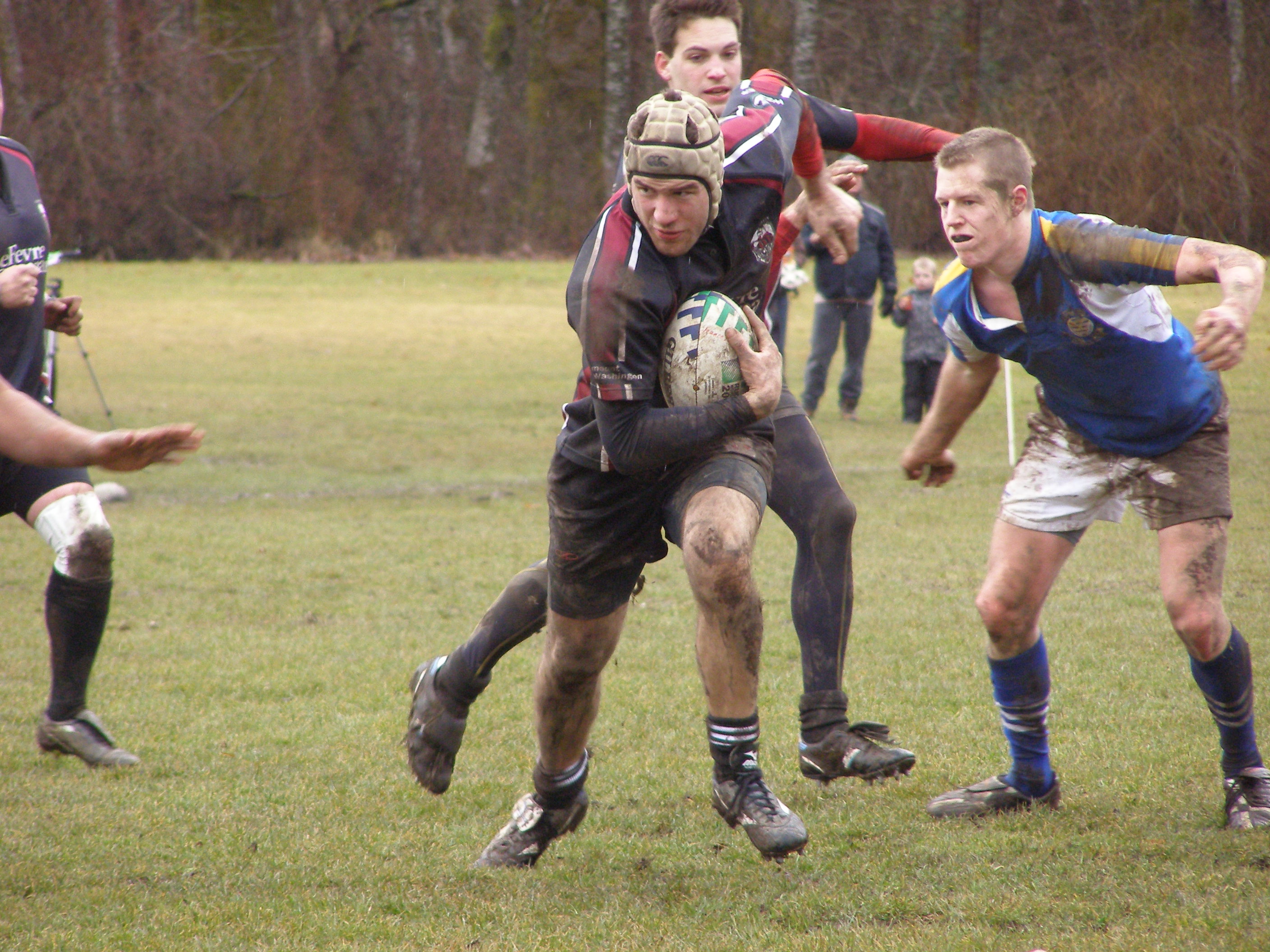 Eli Cummins on a determined run in a recent game

Eli Cummins of the Comox Valley Kickers Rugby Club epitomizes why rugby, and indeed any sport, is so important to a community like the Comox Valley. Eli, 28, a product of Oak Bay High School in Victoria, came to the Courtenay in 2004 to work at Mt. Washington and has been playing for the Kickers ever since. Over that time he has matured as a rugby player and has grown to become an exemplary young man and a genuine leader in the Kickers club, a club that is growing by leaps and bounds with an influx of young players who are turning out to play for it. Hopefully they too will develop in the same way Eli Cummins has.
Not so many years ago Eli was a bit of a tear-away who partied heavily and often showed up to play rugby on Sunday in a state that showed he was burning the candle at both ends. Tough economic times here in the Valley often forced him to leave home and seek any kind of employment anywhere. He worked as a surveyor’s “chain man”, as a deck hand on a tuna boat, as a bartender and caterer, as a labourer, indeed at any kind of work he could find. When he returned home the first place he always headed was to the Kickers club looking for a game and a party.
A few years ago he realized that the kind of life he was leading needed to change so he took a big leap and started his own business: Cummins Fencing. “I started the business in 2008 and built five fences that summer, but the winter was tough and I went into debt to the tune of $20,000. The next year I built 45 fences and things began to turn round but, I have to admit, that during that first winter I wondered if I had made a big mistake.” Now he employs four workers — all from the rugby club – and sometimes as many as seven when he’s really busy.
Eli plays inside centre for the Kickers. It is probably one of the most difficult positions on a rugby field. Do the right thing and no one notices, do the wrong thing and your mistake sticks out like a beacon in the darkest of nights. He, however, has mastered the position and rarely makes mistakes. On Sunday he scored a wonderful try full of skill, sidesteps and solid running that highlighted the club’s 67-12 win over lowly Saanich Aggies. The strength of Eli’s game, however, is not just in scoring tries, but in his leadership skills both on and off the field. On the pitch he quietly encourages the younger players around him, steadying them in their defensive roles and unselfishly laying on scoring opportunities for them on offense. In the clubhouse he carries himself with a bearing that makes the younger members gravitate to him in order to discuss their play and learn from the veteran Eli has grown to become. This season, in the absence of the club’s usual captain through injury, Eli stepped in to take on that role. “I was asked to captain the side and willingly stepped in to help the club in any way I can. I’m very competitive, and being captain helped me realize that I had to take a calmer and more maturely attitude on the field. It was a great experience.”
Clubs such as the Kickers constantly struggle to pay the bills in order to cover the costs associated with field rentals, referee fees, uniforms, travel and equipment. The club, luckily, have some generous sponsors amongst them a new one this year: Cummins Fencing. “Rugby and the Kickers have played an important role in my life. I just love playing the game and I want to see the club do well, so I thought I would do something that would push it in the right direction. My company his growing successfully and I am in a position where I can help out, so I became a $500 sponsor. I’m in a position where I can do that and I am very happy to do it.”
While Eli’s story is not unique in sport it needs to be told as a reminder of how important sports, such as rugby are to the well being of a community and in instilling the proper values that will make young people succeed in life. Need a fence call Cummins Fencing (250-898-9215 — www.cumminsfencing.ca)
For the record. Both Saanich and the Kickers enjoyed a free-flowing game on Sunday at Cumberland’s Village Park. The Kickers scored ten tries as well as a penalty try awarded by the referee and five conversions kicked by Konrad Nikkel, who looks more comfortable in the #10 jersey with every game. The visitors managed two tries and a conversion for a final score of 67-12. Kickers scorers: Brandon Robertson, who enjoyed a fine game playing only his second game as a prop; Damian Kudoba with a tidy hat trick of tries demonstrating his pace and guile on the wing; centre Steve Hextall with two; lock Vince Bennett after a storming run; Cummins with his; Nathan Holley when he picked up a loose ball near the line to dive over and flanker Todd Stewart who capped a fine afternoon with a heart pounding run to the line to finish the scoring.
The Kickers take on the Castaway-Wanderers in Victoria next Sunday March 18 and the following weekend are also away to Velox down Island.

Todd Stewart closes in on a Saanich Player

Steve Hextall in white shorts fends off a Saanich tackler