CUP FINAL RUBGY AT ITS BEST 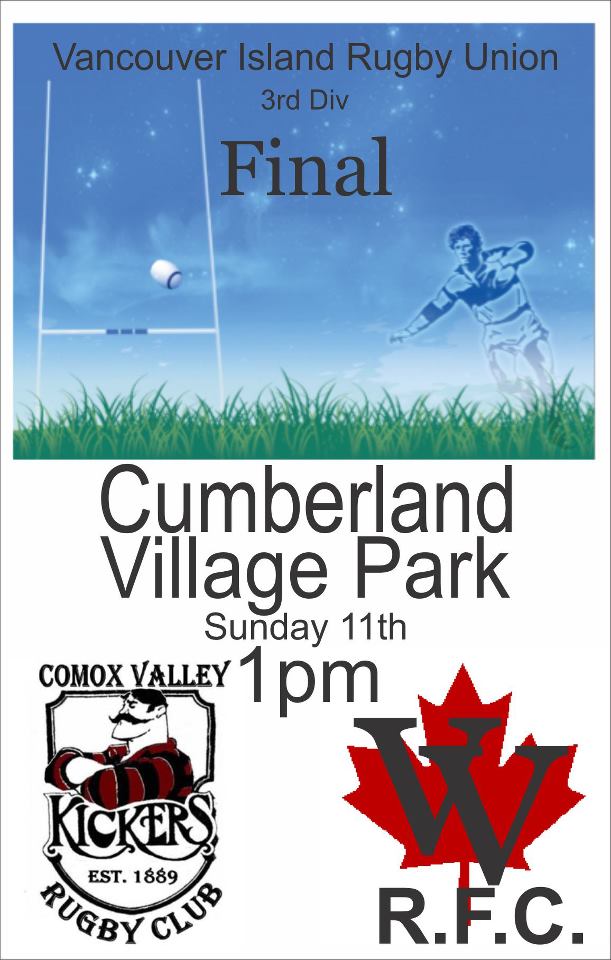 A bright sunny winter Sunday at Cumberland’s Village Park provided the perfect setting for a titanic clash between the 10-0 Comox Valley Kickers and the 9-2 Velox-Valhallians as they took the field to play the final of the Fall Vancouver Island Div. 3 final. The biggest crowd of the year; intense committed rugby by both sides; referees and touch-judges brought in especially from Victoria with miked headsets – the first ever seen in the Comox Valley, all helped create an atmosphere of cup final rugby. And, as befitting such a momentous occasion, the appreciative crowd enjoyed a hard-fought, well-contested match that saw the visitors from Victoria win 24-15 and retain the impressive looking trophy they had won last season.
The home team played a fine, spirited game of rugby spinning the ball wide to their backs at every occasion but, as the game wore on the more experienced visiting team, boasting seven players over the age of thirty seven, one of whom, forty-eight year old Canadian international prop Kevin Wirachowski earned seventeen caps playing for his country from 1992-2003, proved decisive. It was this experience that saw the Valhallians eventually gain the ascendency in the second-half to secure the victory after the sides had played to a 10-10 half time draw.
“It was a fantastic game of rugby between two teams that like to play open, running rugby,” commented Velox captain Todd Cunningham after the game. “In the end however, it ended being a defensive struggle with our experience being the decisive factor. Full marks to the Kickers, they gave as good as they got and it was a battle right to the final whistle.”
The Kickers scored five minutes into the game when centre Eli Cummins, who was the pick of the home team backs, scored under the posts, after fullback Ross McLean opened the door with a scintillating run that saw him carve up the Velox backfield. Cummins converted his own try. 7-0. The visitors replied at twelve minutes when hooker John Lyle forced his way over after a period of domination by the Velox forwards close to the Kickers line. No conversion: 7-5. The visitors increased their lead at twenty-seven minutes when centre Dale Grinston touched down wide out after his forwards had created a solid platform from which to launch an attack through the back-line. 10-7. Minutes later Eli Cummins kicked a penalty for the Kickers when the visitors infringed offside in front of the Kickers’ goal posts offering Cummins the easiest of opportunities. 10-10, half-time.
It took Velox only two minutes into the second-half to take the lead. Fly-half and captain Todd Cunningham made the simplest of fakes to open the Kickers’ defense which allowed him to score near the posts giving Kevin Summerfeld the softest of conversions. 17-10. To their credit the Kickers replied almost immediately when the team’s top try-scorer Steve Hextall scored his thirteenth of the season touching down after a long spell of continuous attack by his teammates. 17-15.
Velox came right back and, had it not been for a number of stalwart defensive goal-line stands, the score could have been dramatically higher. In the end, however, centre Conrad Newall did make a nice break to score at fifty-five minutes, which Summerfeld converted, bringing the score to 24-15. In the final fifteen minutes the Kickers camped inside the Velox twenty-two but could not find a way to crack the solid defensive wall put up by the eventual winners. 24-15 final.
“We battled hard all the way, even though we didn’t win a scrum or line-out the whole second-half,” said Kicker’s co-coach Frank Balcombe after the game. “I think part of our downfall may have been the fact that in the games leading up to today’s final we didn’t have the opportunity to play the type of opponent we faced today. Perhaps our other wins came a bit too easily and today we faced a team full of experience who were more used to playing this kind of Grand Final rugby.”
Scrum-half Mike McGee and centre Eli Cummins played well in a losing cause in the Kickers backs with back-rowers Jeremy Grootendorst and Brad Hannah looking prominent in the forwards. “There is no doubt we have the bodies and the heart,” continued Balcombe. “ But we need to know when to do the right things at the right time. These are all things that we will be working on as we prepare for the Spring season and we look forward to making it back to the final and achieving a more favourable result.”
The Kickers will enjoy a Christmas break and will return to action in the New Year.

Many thanks to Michelle Hamilton for the images below.

SIDELINES:
The Kickers Rugby Club invites all those men and women interested in playing rugby to attend training sessions on Tuesday and Thursday evenings at 6.30 p.m.at the club’s Fallen Alders facility on the Royston/Cumberland Road. For more info, visit our website at http://kickersrugby.ca.The club gratefully acknowledges our team sponsors, Investors Group and Wedler Engineering; along with our club sponsors AFC Construction and Continual Palingenesis – Social Media Solutions. Many thanks also to Bayview Chiropractic and Yummies & Gyros for their community way dollars (cw$) contribution. Without this support rugby would not continue to flourish in the Comox Valley.