A Saturday Filled With Kickers Rugby 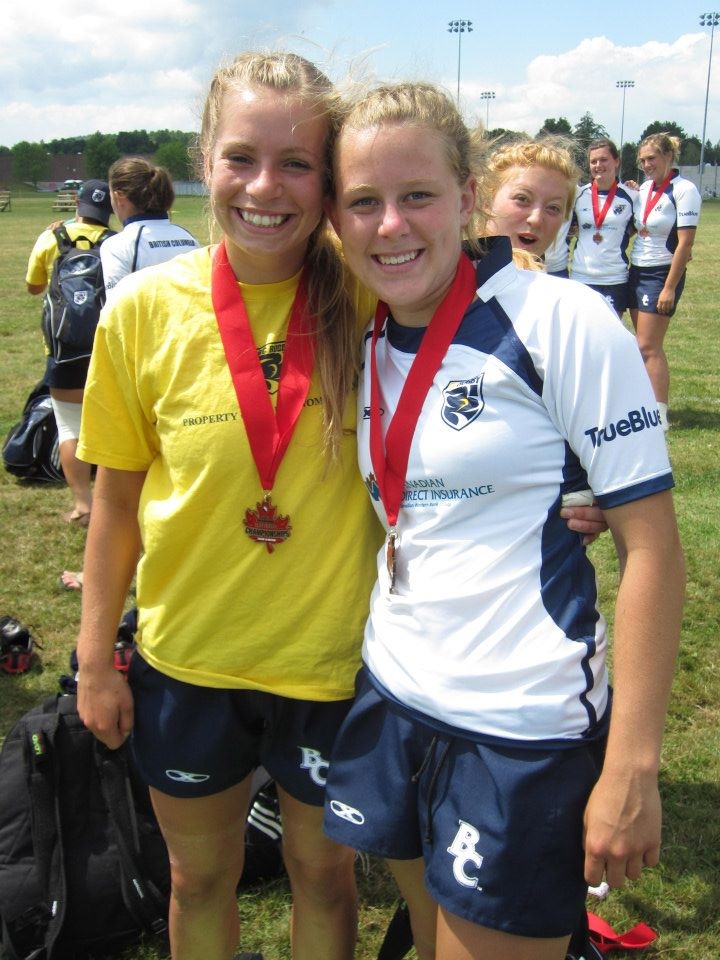 It was a big weekend for the Comox Valley Kickers Rugby Club. On Saturday in light rain at Village Park in Cumberland the senior women second division side United came from the lower mainland to challenge the Kickers women, and the senior men first division team Cowichan came to take on the Kickers men. In 2013 the Kickers have proudly elevated each senior team, the men taking a step up to Vancouver Island First Division, and the women a step out into a wider Second Division competition that includes teams from the lower mainland. Bold moves intended to raise the bar for rugby players and rugby fans in the Valley. That bar was set high by the visitors in a 4 hour display of rugby at its best.

The Women kicked off at 11:30 and from the first whistle the intimidation from the Kickers forward pack, including some bullying runs from Sheryl Alexander, quickly forced United to adopt a wide ranging passing game, using phases of play to eventually outnumber the Kickers defense, a ploy that worked for United bringing an early try. The home team quickly answered with Molly Florian employing a deft sidestep and a quick weaving run to go in under the posts, converting her own try and maintaining a  competitive scoreline. An U18 BC rep last year, Florian has recently played for Crimson Tide and she posed an ever present danger during the game leading United to take care to deny Florian space whenever possible.  With steady pressure and a somewhat lopsided penalty count the score continued to widen for United, and despite excellent solid midfield tackles from the likes of Michelle Hamilton, United ran in four more tries. Late in the game The Kickers forwards took back the tight direct style and poured on the pressure grinding all the way up to within 5 m of the try line. A tap penalty fed to Aimee Burley let her power through the defense to score a well deserved late try. Final score 30 – 12 United.

While the women enjoyed a post game meal overlooking the Village Park field the Kickers Men went into battle against Cowichan, and what a battle it was. The high impact clash began with a crunching first hit up from Kickers #8 Ben Travena and continued in the same style for both teams. Speed and urgency were the defining factors from the Cowichan Piggies forcing the Kickers to elevate their own level of intensity as points started to mount for the Visitors in the form of three tries run in after sustained attacks on the Kickers line. Rookie Kicker loose forward Brandon Hudson proved a real handful for Cowichan with his high work rate and hustle and in spite of his efforts the Kickers would not get on the scoreboard until the second half. Scrum half Mike Magee darted in and out of play looking to create some space and opportunity for the Kickers and his constant pressure started to turn the tide in the second half with Captain Andrew Hextall working his way through rare gaps in the Cowichan defense putting the Kickers on the front foot. Chris Ostertag made the most of his short time on the field and put the Kickers on the board with a forty meter try that left an impressive trail of bodies felled by his destructive straight arm fend. Not a bad use of his lunch break and a boost for the Kickers in a rough game. With a number of veterans lost to injury a few new Kickers players saw some action and although thrown in the deep end they stayed keen and tenacious. Final score 39-5 Cowichan.

It was an illuminating day for Kickers players and coaches. Tuesday and Thursday team practices will surely see higher attendance as each player looks to identify strengths and weaknesses in individual play and to work toward building an ever improving team.