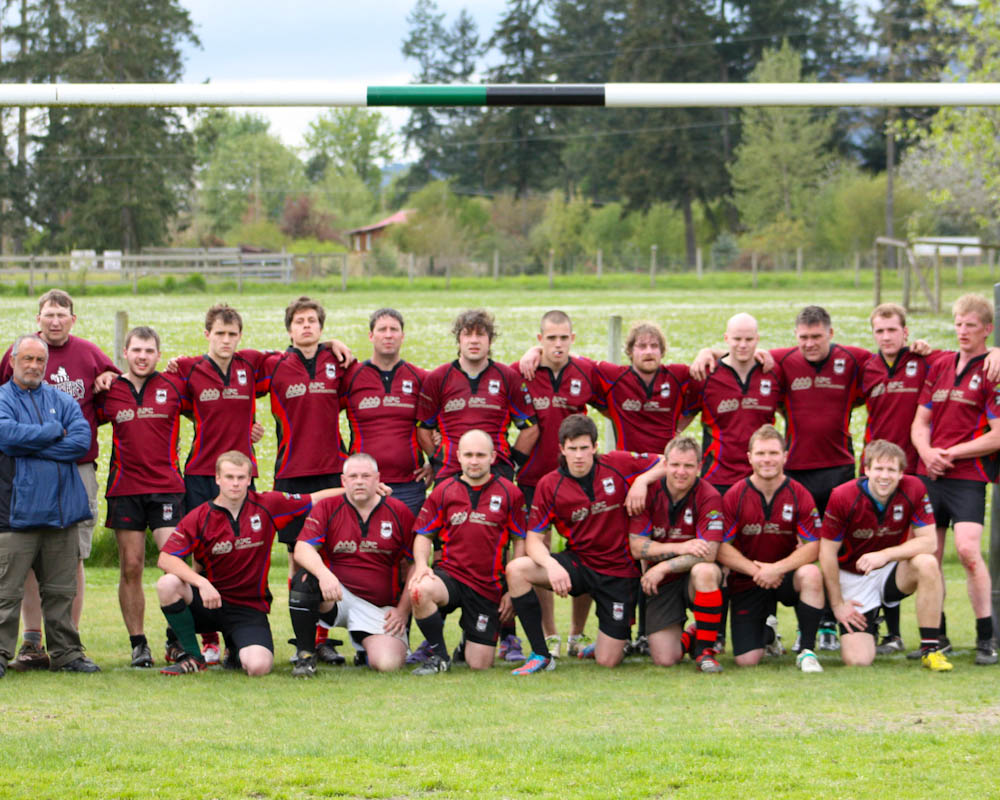 May 1, 2013, (ISN) - The road to the Provincial Championship for the Comox Valley Kickers runs through Cumberland this Saturday as they get set to host a semi-final of the Division 3 Tier 2 BC Championship in Village Park at 1pm.

The Kickers qualified for the Provincial Championship after securing a spot in the NVIRU Championship game last fall. The top seeds from the fall and then the spring competition have a chance to play first for the Island Championship in the revamped Island 3rd division. After the Island Championship is decided both teams are off to the BC Championships as a top seed in both Tier A and B. With the NVIRU trophy back on site this last Sunday the #1 ranked team in the spring of 2013 the Velox Valhallians (7-1) took to the field to defend the trophy against the #1 ranked team from the Fall 2012 competition, the Comox Valley Kickers (6-0).

Comox Valley halfback Mike Magee (#10) looks at the inside pass option from Chris Ostertag (#12). The Kickers would drop the league final to the Velox Valhallians 10-6 in Cowichan - Photo by Michelle Hamilton

These teams have met numerous times in the Championship game over the last several years with mighty Valhallians from Victoria always managing to come out on top in very tight competitive games. As the Kickers managed to put a respectable effort in the finals time after time, the depth of the Valhallians bench seems to be the difference maker in the later stages of the encounters. Since winning their first NVIRU trophy in the spring of 2010, Velox has claimed it 6 times in the last 4 years.

Kickers Outside Center Stephen Hextall (#13 red) takes the ball into contact against Richie Dark and Kevin Wirachowski (in black) of Velox. Hextall would turn in a solid effort before being slowed by a calf injury late in the game - Photo by Michelle Hamilton

Comox Valley #8 Ben Trevena looks to offload the ball to oncoming support. The Kickers scrum had a rough go Sunday against a very experienced polished pack, but enjoyed some success in open field play - Photo by Michelle Hamilton

Ideal field and weather conditions on Herd Rd. as the kick off sailed through the air signaling the start of the game. Both teams would test each other in the early stages as the slow grinding attack of the Valhallians would put intense pressure and test the willingness of the Kickers to put their bodies on the line. Comox responded well early making the necessary tackles and setting their mid field platform effectively when presented the opportunity to attack. After defending like mad men the Kickers would push the ball down field before being rewarded with a penalty dead center of the field about 15 yards out from the uprights, giving the Kickers a shot at goal through Tony McCaffery (#15) who made the routine kick putting his team up 3-0.

The lone try of the day was scored by Velox’s Ray Young (#8) on a pushover try late in the first half. Seen above, Young dives over the line for 5 points with Cam Neish in support - Photo by Michelle Hamilton

Back and forth the play would go, with Velox owning the Kickers in the set pieces. Winning their own ball in the lineout and stealing the Kickers ball at will, the Valhallians made it look easy.

Scrums were handled the same way by the defending champs as the Velox hooker had good luck against the head and given the chance to scrimmage 5 meters from the Comox goal, the pack in black pushed over for the try and the simple conversion as well. Although it was a clearly a pack effort, the try was awarded to the Velox #8 Ray Young.

At halftime the score line sat in favour of the defending Champion Valhallians 7-3. Sunny skies and periodic gusts of wind would lead way to an even tighter 2nd half.

Positive yards were hard to come by on Sunday, every inch was a battle. A Comox front rower tests his opposition - Photo by Michelle Hamilton

A stalemate for much of the 2nd half would leave spectators with no finger nails as the game came to a conclusion. Comox managed to get close to the try line on a couple of occasions through the hands of Nathan “Preacher” Holley and right through hands of Stephen “KY” Hextall. Both players came extremely close to logging points but neither managed to make it official on the board.

The penalty kickers from both teams were treated to an easy 3 points apiece by way of penalty kicks from the gravy areas on the field throughout the 2nd half as Velox lead 10-6 with the clock ticking down.

The challengers pushed to the end but would come out with the short end of the stick as Velox Captain Paul Eby received the trophy to the cheers of his team mates.

The 2012-2013 Comox Valley Kickers. The Kickers went undefeated in the fall competition (6-0) for the 2nd year in a row before trying their hand at a 1st division exhibition schedule in the spring. Comox hosts Capilano B in a Tier 2 provincial semi-final this Saturday in Cumberland - Photo by Michelle Hamilton

Velox now moves on to host their Tier A semi-final, which will see the Valhallians host the Brit Lions next Saturday in Gordon Head.

The Comox Valley Kickers host their Tier B semi-final as Capilano B make the trip to Cumberland on Saturday, while on the other side of the playoff bracket sees Abbotsford host the Vancouver Rowing Club with the winners of both games to meet on BC Championship day location TBD.