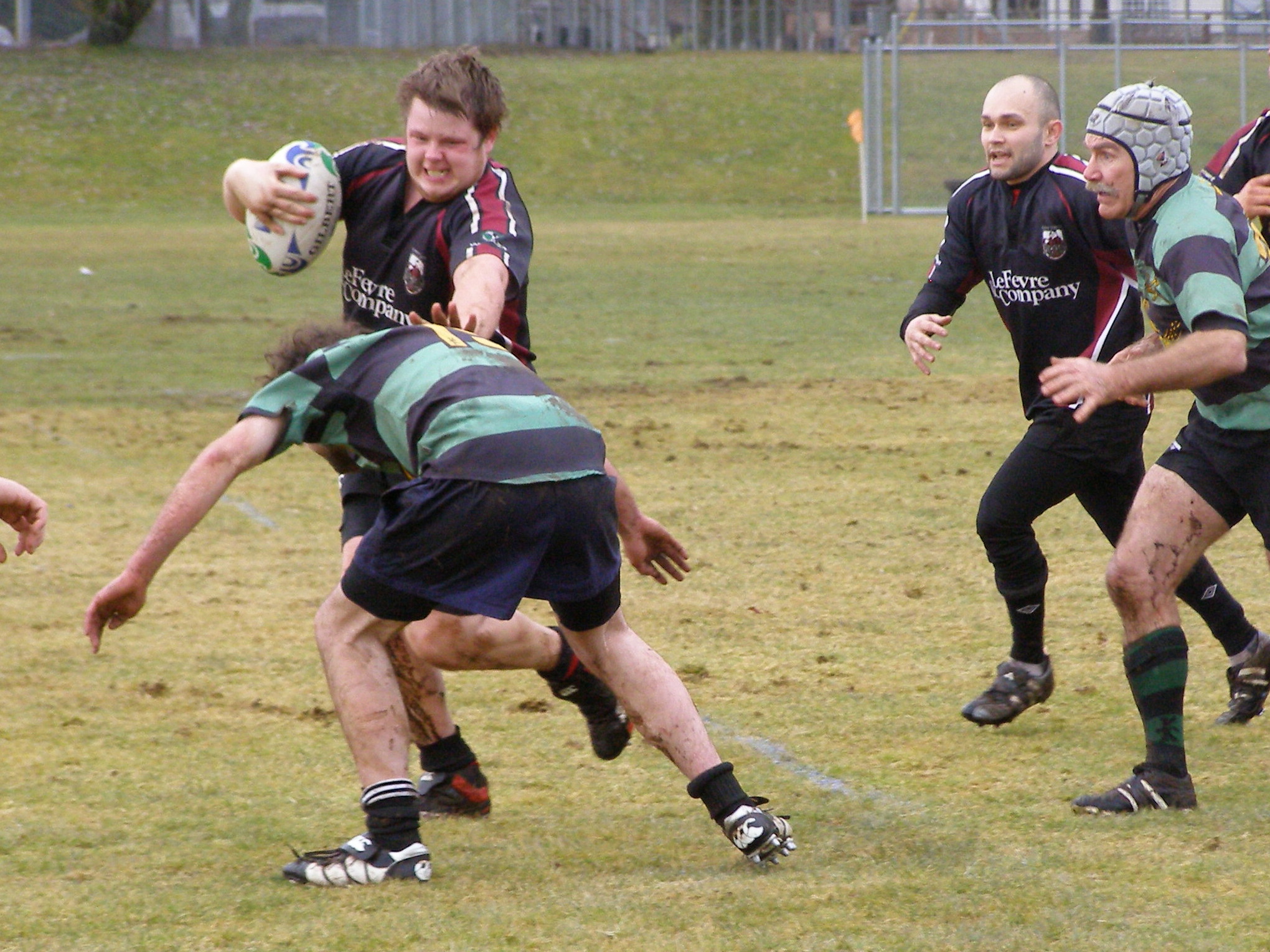 “Who are all the new guys?” asked a spectator at the Kickers vs Cowichan rugby match on Sunday at Village Park, Cumberland. Well might he ask. Over the last few weeks an influx of new players, particularly from Campbell River, have seen the Kickers with a surplus of players standing on the sidelines looking to get on the field. “It’s a bit of a problem,” says Kickers coach Aaron L’Arrive. “ A lot of these new guys play in the back-row and in the centres and I have a hard time making sure everyone gets a game.”
One of the new players, Damian Kodaba, showed a great deal of pace and grit as he scored one of the Kicker’s seven tries in the 44-0 romp over the lacklustre Cowichan Piggies, a mere shadow of the once powerful side that used to be the Kicker’s nemesis. “I usually play scrum-half, which I did for a while today, but they put me on the wing as well, and I had a great time. I was lucky enough to score a try and get a few good runs,” offered the former Carihi High player. “ There isn’t a men’s team in Campbell River anymore and some of us decided to drive down and attend a Kicker’s practice and test the waters. We really liked what we saw and now a bunch of us carpool down every week. We’re really enjoying it and we’re having a lot of fun.”
The Kickers began well spinning the ball through the backs until another newcomer centre, John Vinnedge, a former Vancouver Rowing Club player, went in for the opening score just two minutes after the opening whistle. Eli Cummins converted: 7-0. Tries by wing Tim Begg, back from a sabbatical, for his first of the season; centre Steve Hextall with two, for his thirteenth and fourteenth of the year, and another by centre Eli Cummins, left the half time score at 27-0 demonstrating the complete dominance of the Kicker’s back-line. Kodaba scored his to open the second-half followed by others from Mike Magee and Leigh Burley, which Cummins converted, to create the final 44-0 tally.
“ It was a great way to open the second-half campaign,” offered Kicker captain Eli Cummins. “ We were somewhat rusty but we started the first-half strongly and then got a bit sloppy toward the end of the game. Konrad Nikkle controlled the game well for us at #10 and Jeremy Grootendorst played really well in the pack taking nearly every line out ball and was quick to the break-down as well. Brad Hannah played his usual strong game when he came on and while Steve Hextall scored two tries, he doesn’t deserve any credit because that’s what we have grown to expect of him. He’s a try-scoring machine.”
The Kickers will take the ferry across the Strait next Sunday, Feb 5th, to play Powell River.

"Big Andy" takes them on in the trenches.

Steve Hextall heading for the try-line.

Tim Begg goes over in the corner