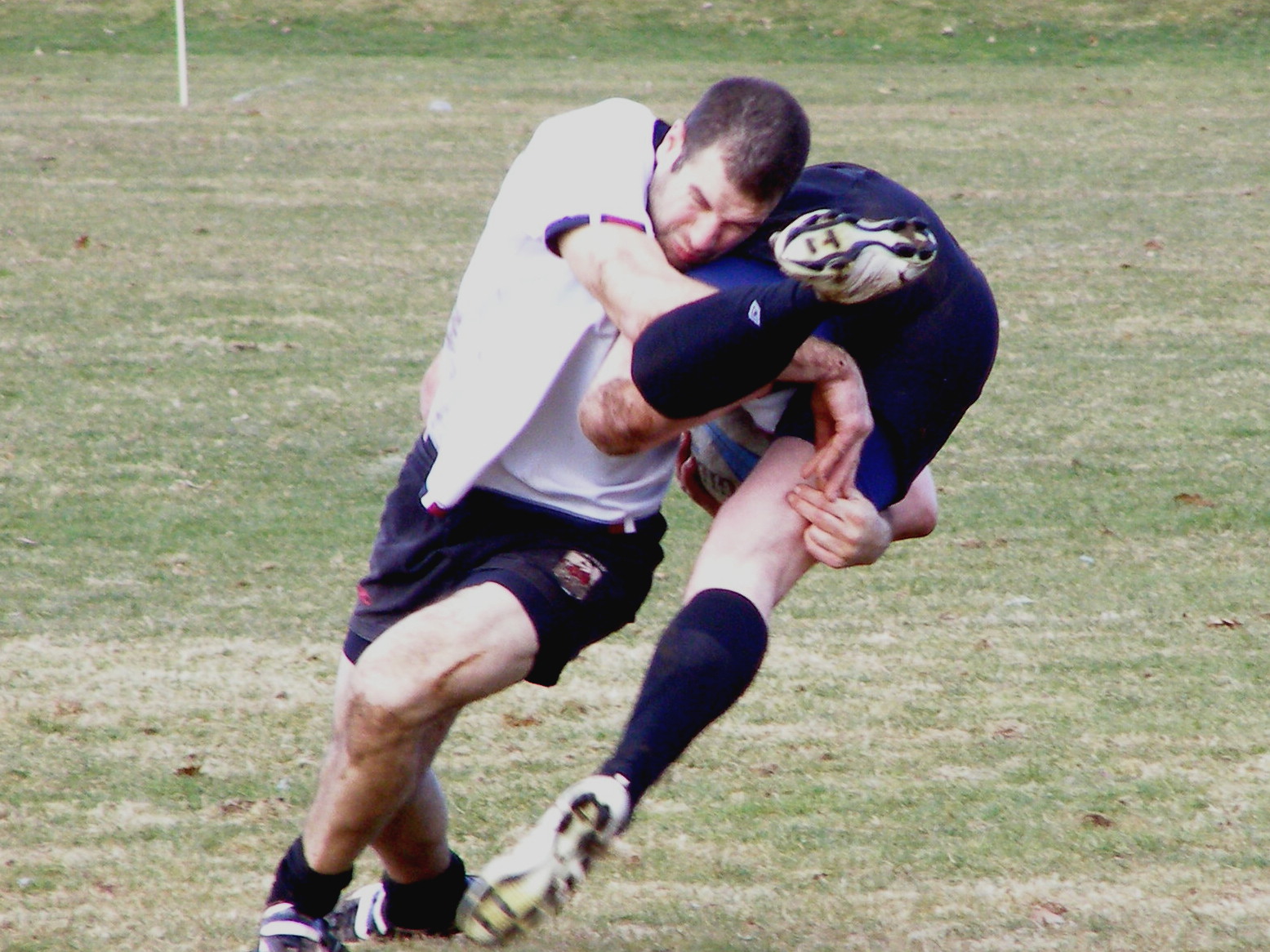 Kicker centre Eli Cummins puts in a picture perfect tackle to stop a Velox player dead in his tracks.

Teams often have trouble finding their “rhythm” when playing games and such proved the case of the AFC Comox Valley Kickers as they took on one of only two teams to have beaten them this season. During the first-half of play on Sunday at Cumberland’s Village Park against the visiting Velox-Valhallians the Kickers struggled to find any kind of constructive form. They went through the motions of running the ball, kicking the ball, mauling the ball, and rucking the ball but they just couldn’t make anything “click”. No matter how hard they tried, nothing seemed to work. Scoring passes dropped despondently to the ground; kicks squirted aimlessly in the wrong direction and things that had worked effortlessly in past games just didn’t seem to happen. To their credit the Kickers, however, stuck to the task and eventually the late individual brilliance of some of its younger players helped them record a well-deserved 26-7 victory.
The Kickers knew from the outset that they could not take the league-leading Velox-Valhallians lightly having lost the Fall League final, 24-15, to them in December. They also knew that they were coming off a 28-17 loss to Cowichan last weekend and with these things in mind set about the task of playing Velox with come conviction. Things, however, even with all the will in the world, don’t always go as planned and at half-time the visitors led 7-0 after scoring on a mistake by the home team that saw Velox #8 Al Hall score and scrum-half Kevin Sommerfeldt convert.
The Kickers laboured on in the early going of the second-half until, finally, fullback Curtis Parker, a former Isfeld High School player with a great “set of wheels” made a fine break that saw him pretty well run the length of the field to score:7-5.

With the game now on the cusp and with Velox exerting constant pressure, wing Tim Begg and the centre pairing of Mike Magee and Steve Hextall set up lock Vince Bennett, who is still a student at Isfeld High School, setting the big lad up for a blustering run that saw him touch down under the posts. Konrad Nikkle conveted: 12-7. Having finally found their pulse, the Kickers now looked like a different team and were unfortunate that they didn’t score again when Steve Hextall went over the line only to have the referee adjudicate that he had been “held up” in a try-saving tackle.
With the bit between their teeth, captain Tony Forth made a fine run to score after Konrad Nikkle, Brandon Huddleston and Andy Hextall opened the door for him. Converted Nikkle: 19-7.
With the game in the dying minutes, fullback Curtis Parker, made another of his scything breaks and this time set Damian Kuoba on a clear run to the in-goal to run in the fourth Kicker try. Nikkle converted: 26-7 final.
“Obviously we saved the best for the end,” laughed Kicker coach Aaron L’Arrive. “It is interesting that it took two substitutes, Bennett and Kodaba to seal the deal in the end. It was a bit of a struggle for most of the game but then things suddenly opened up in the last fifteen minutes. It was an exciting game that could well have gone either way except for some fine runs by our youngsters.”
No trouble picking a “Man of the Match”. Once again, as he has done in many recent games, flanker Andy Hextall lit up the field with his brilliant defensive and offensive play. He should have scored a try, only to have his scoring run called back for an infringement committed by teammate. Nevertheless, his contribution to the overall Kicker performance kept his team in the hunt and ensured the final victory.
Next weekend the Kickers take on Saanich Aggies down Island.
SIDELINES:
The Kickers Rugby Club invites all those who are interested in playing rugby to attend training sessions on Tuesday and Thursday evenings at the club’s Fallen Alders facility on the Royston/Cumberland Road. Junior players take to the field at 5.30 p.m. and the Men and Women at 6.30 p.m.

Steve Hextall on one of his storming runs.

Kikcers gang up on a Velox attacker.