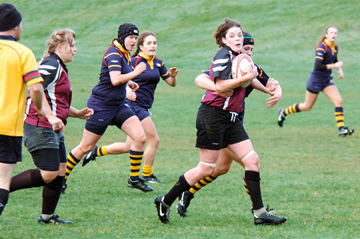 Back from a trip home to England, C.V. Kicker fullback Steve Hextall nailed down two tries against the Nanaimo Hornets on Sunday adding to the four he has already scored this season, to make him the club’s top try scorer so far this season.
Unfortunately, Hextall’s heroics in the Hub City couldn’t prevent the Kickers record the third loss in a row, 31-17. New winger Ross McLean scored the Kickers' other marker which Adam Erickson converted.
Hextall has been a stalwart for the Kickers for the past number of years and his aggressive, knees-up, striding running style makes him a handful for opposing teams to contain. Last season he recorded a team leading eleven tries, and this year he has netted six already with more than a half season to play.
In the second-half of the contest against Nanaimo, led by prop Ian Harris and #8 Andy Hextall, the Kickers spent most of their time in the Hornet end making concerted attacks on the home team’s line but just couldn’t find a way to score against a stalwart defence. In the end the Hornets scored two tries against the run of play to seal the win.
Despite the loss the Kickers hang onto fourth place in the nine team Vancouver Island Third Division table. The team takes on Port Alberni Black Sheep at Village Park next Sunday.

The Comox Valley Kicker Women’s team took on the powerful University of Victoria Vikettes at Village Park Cumberland last Saturday and though competitive in the first-half, sheer strength in numbers wore the home team down in the second stanza.
The Vikettes, sitting second in the Vancouver Island Women’s League table, arrived with over twenty-five players and in the first-half stuck with an unchanged fifteen, which allowed the Kickers to compete on an even plane. U.Vic scored first but Kicker centre Samantha Kreeger evened the score when she found a gap and went over the try line, converted by Paula Moore. The Kickers defended well with fullback Amber Van Der Mark foiling Vikette scoring attempts with sound tackles for which she later won “Women of the Match” honours.
The Kickers took the lead when the forwards drove downfield to near the visitor’s line where scrum-half Laura Locklin wiggled her way over the line. Paula Moore converted: 14-7, half-time. In the second-half, relentless pressure and a liberal use of substitutes saw the Vikettes mount an unrelenting assault on the Kicker line as the Kickers struggled with exhaustion. The visitors scored six more tries to leave the final score at 55-14.
Despite the loss flanker Shannon Walton and #8 Aimee Burley stood out for the home team defending furiously and continually breaking up Vikette attacks. Captain Aimee Burley commented after the match that: “This game was probably the most fun our team has had on the field this season. There was lots of open play and everyone had a chance to get their hands on the ball. Even though we lost today, our skills are improving and we are playing more as a team than we have in the past. I was proud of the way everyone played today.”
Next Saturday the Kicker Women take on Cowichan at Herd Road in Duncan.

The Kickers Rugby Club invites all those who are interested in playing rugby to attend training sessions on Tuesday and Thursday evenings at the club’s Fallen Alders facility on the Royston/Cumberland Road. Junior players take to the field at 5.30 p.m. and the Men and Women at 6.30 p.m. For added information and details go to www.kickersrugby.ca.
The Club gratefully acknowledges our sponsors: The Le Fevre Property Group; Investors Group; Central Rentals; Mount Washington Alpine Resort; Wedler Engineering, the Butcher Block and Pilon Tools without whose support rugby would not continue to flourish in the Comox Valley.