Comox Valley Kickers get the upper hand over the Cowichan Piggies! 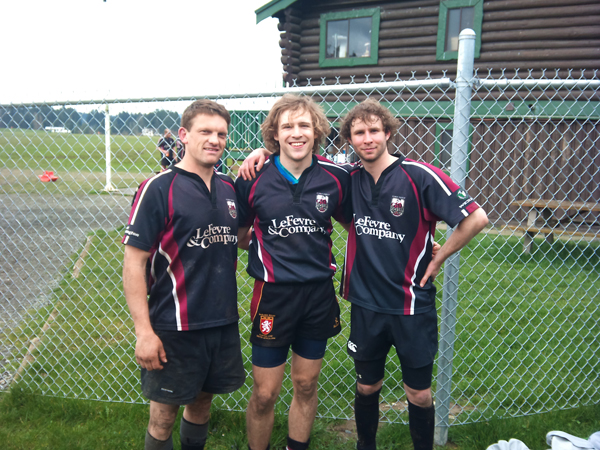 It was a fired up Comox Valley Kickers team that stepped onto the soggy pitch at Herd Road to face long-time rivals Cowichan. Due to snow earlier in the season, this make-up game was to be the first of two consecutive clashes, with the next one happening at home on Sunday, April 4th. After a very physical contest the visitors walked away with a few bruises, some big smiles and a 25 - 5 victory over the Piggies. “This win will give us lots of confidence and inspiration for next week’s home game.” said tryscorer Steve Hextall.

The boys in black started pushing forward as soon as the whistle blew and kept the ball inside the green half until flyhalf Doug Wynd converted a penalty forced onto the hosts. Cowichan tried to drive back but saw their first-half hopes crushed as swift Steve Hextall ran in a beautiful 40m try.

The Kickers opened the 2nd half with a try from Ross Mclean at fullback, putting his speedy sidestep to excellent use as he ran past 3 defenders, earning him the Most Valuable Player title. The Piggies answered with one of their own, unconverted. Kicking centre Brandon Huddleston converted another when Doug Wynd powered his way through the Cowichan line for the second score of the half by placing an angled kick right between the uprights. And then the productive flyhalf converted a final penalty for the total of 25.

Another muddy line-out at Herd Road.

Although the points all came from the Kickers backline, the forward pack deserve much of the glory. Their relentless driving and rock-solid defense kept the hosting team on their heels, often driving them to desperate plays that cost them penalties. Mention should also go to captain Greg Merchant for leading his team by example during a hard-contested, emotional match.

The Kickers face Cowichan in their 2nd match this coming Sunday in Cumberland - kickoff at 1pm!

SIDELINES:
The Kickers Rugby Club invites all those men and women interested in playing rugby to attend training sessions on Tuesday and Thursday evenings at 6.30 p.m.at the club’s Fallen Alders facility on the Royston/Cumberland Road.