“HOW HIGH’S THE WATER MAMA?” 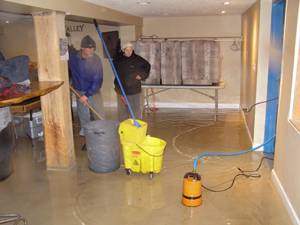 Over the past few weeks a determined band of club members have been working to finish the Fallen Alders clubhouse and, with the job nearly complete the rains came.

On December 23 Leigh Burley arrived at the clubhouse with some counter tops for the kitchen to discover that some water trickling into the clubhouse. A bit later, when Colin Chappell arrived the water had begun to rise so he contacted Colby Craven of Fallen Alder. Leigh then called Kickers President Greg Merchant and a few others and they began hand-digging ditches to try and divert water away from the building. By now water was running in sheets off the training field, across the parking lot and down into the clubhouse doorway. As well, water was running down the back of the building and in through the back door. Leigh, Greg and a few others kept digging in the downpour until about 11 p.m. and they seemed to have diverted most of the water away from the building.

On Christmas Eve morning Colby arrived with her dad John and a few  Fallen Alders neighbours to find that water lay six to eight inches deep in the clubrooms and had reached the top of the new baseboards at the bottom of the freshly attached and painted gyprock. They immediately went to Central Builders to get as many pumps as they could from Colin Chappell, who manages Central Builders Rental Division. Armed with pumps they inserted them strategically and then dug a massive ditch using a small Kubota digger from Central Builders to take away most of the water.

It took about three or four hours to extract all the water from the clubrooms with Andy Eaton there to lift the couches and other vulnerable stuff off the floor to minimize damage. After the water was gone, fans and humidifiers replaced the pumps and they set about drying the place.

It is too early to assess what damage has been done to the clubhouse, but it likely isn’t very significant. The baseboards and bottom of the gyprock can easily be repaired and, God knows, couches and chairs seem to arrive in the clubhouse in excessive quantities and can be quickly replaced. The good thing is that the Fallen Alders Committee will deal with the water issue and we shouldn’t face this problem again.

Add to this: “Thank God for Central Builders and Colin Chappell!” Without him providing the pumps, Kaboda, fans and humidifiers, things could have been a whole lot worse.

Have a Dry and Merry Christmas and be sure to come to the Toilet Bowl Over-Under Game at Noon on New Year’s Day and view the scene of the “Great Clubhouse Flood of Christmas 2010!”