PLAYOFFS PROVE TOO BIG A LEAP FOR THE KICKERS 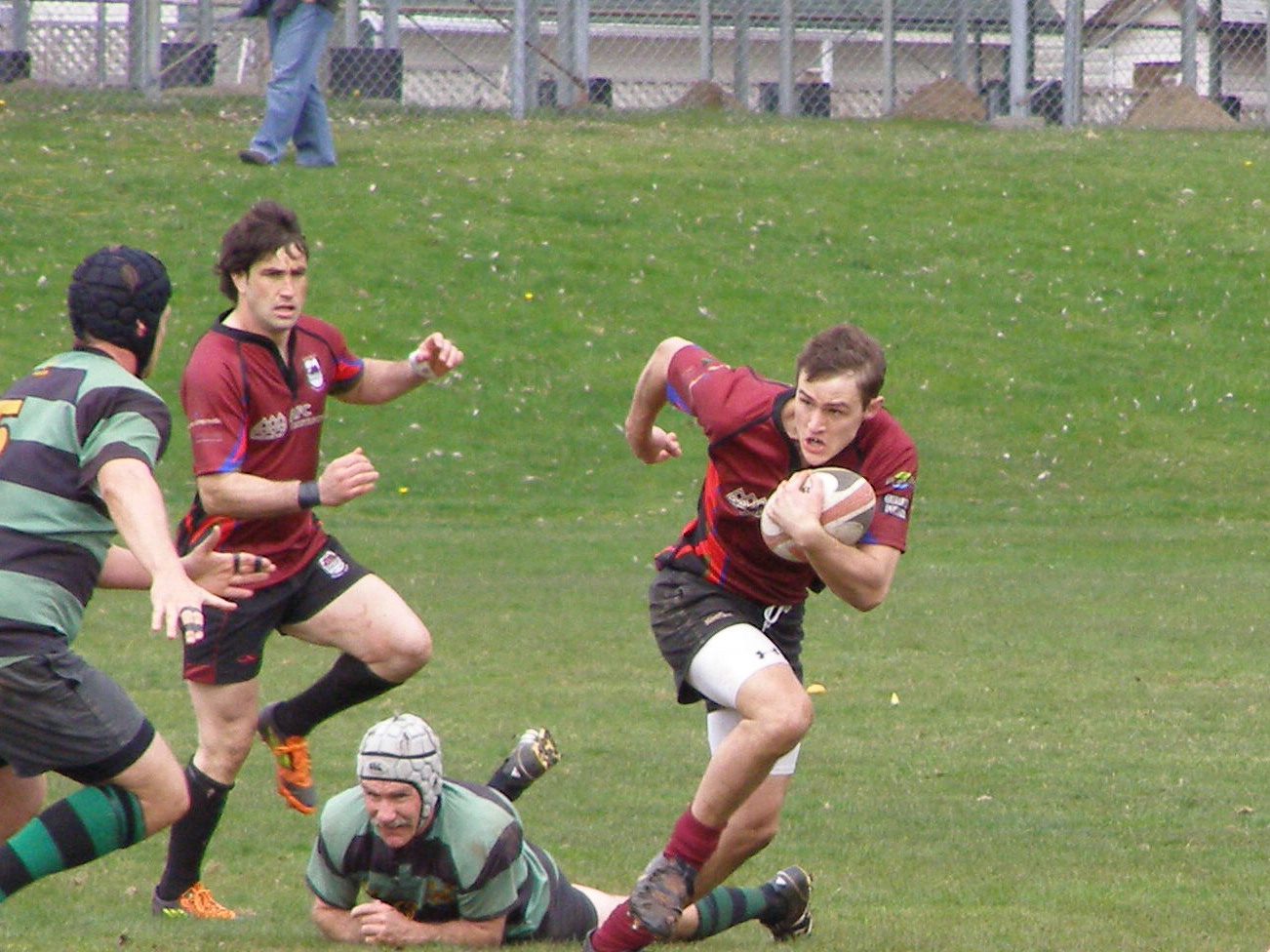 Andy Hextall sets off on one of his patented runs.

Just as in hockey, so in rugby, playoff games require a different standard of play than regular season league play. On Sunday at Cumberland’s Village Park the A.F.C. Construction Comox Valley Kickers, wearing their brand new A.F.C. jerseys, learned that lesson to their peril, going down 16-12 to the Cowichan Piggies. It was a game the Kickers could well have won but indiscipline, a lack of leadership and rushes of blood to the head at the wrong times, lost them the match.

Both teams realized the importance of the game at the outset, knowing that this “one-off” game meant an early summer or a move on to the next stages of the playoffs. With that in mind the game possessed a “nice bit of bite” in the early going, that could either boil over into an ill tempered affair, if not contained, or could have resulted in a really stirring contest. Unfortunately, the referee did not put his stamp on the game early enough allowing the often chippy, niggly play to continue, which led to the match digressing into a badly behaved contest that proved little fun for the crowd to watch and the players to play in. Eventually three players went to the sin bin, but that proved too little and too late to control the game.

The Kickers defended well in the early going with Cowichan in the ascendency, but after keeping the visiting Piggies at bay for some time, Kim Anderton forced his way over the Kicker’s try line to put the visitors up 5-0. Soon after, with the Kickers having trouble getting out of their own end, Kicker wing Curt Parker launched a massive, well-directed kick downfield and followed it up. He created enough pressure on the Cowichan full-back to force a turn over which allowed eighteen year-old, Isfled high schooler Vince Bennett to pick up and score in the corner: 5-5.
Cowichan came back just before the half for Bruce Moss, playing alongside his brother and his father in the Piggies side, to pick up a loose ball and romp in for a try unmolested:10-5. Half-time.

Substitutions at half-time saw the Kickers pack gain the upper hand allowing veteran lock Shayne Stuchbery to take a quick tap-penalty, get up a head of steam and run right through the whole Cowichan team to score under the posts. Konrad Nikkle converted. Kickers 12-10. Unfortunately Stuchbery’s afternoon ended soon after when he hurt his shoulder and retired from the fray. Had he stayed on, his leadership and straight, hard running might well have seen the home side win this contest. As it was the Kickers lost their way, gave away loose ball in the rucks and mauls, lost lineout ball and gave away two silly penalties which Owen Wood easily kicked to seal the fate of the home team. Final 16-12.

Like the Vancouver Canucks, the Kickers have enjoyed a sterling league season, but have lost both the Autumn and Spring playoffs because they haven’t risen to the occasion and come to grips with the toughness and discipline needed for play-off competitions.

“We weren’t disciplined enough,” commented Kickers coach Frank Balcombe after the match. “We wanted to spread the ball wide but the Cowichan backs tackled well and closed down space on us. Once, when we did get it wide, we scored, however, our forwards were slower to the break-down than they should have been. We hesitated – they didn’t!”

Andy Hextall, as he has done all season, played another terrific game at blind-side flanker and his open-side partner Vince Bennett joins him as “Men of the Match” for the Kickers. What a future this young fellow Bennett has in the game — last weekend he scored three tries, added another this weekend and played tremendous all round games both times. He keeps his head down, keeps his mouth shut and just gets on with the job of playing the game. Had the rest of his older teammates played like he did on Sunday, the Kickers would be moving on to the semi-finals.

The Kickers will wrap-up their season with their annual Award Banquet at the Fallen Alders Hall on May 12. For more details watch the Kickers web site: www. http://kickersrugby.ca/