KICKERS KNOCKED OUT OF PLAYOFFS 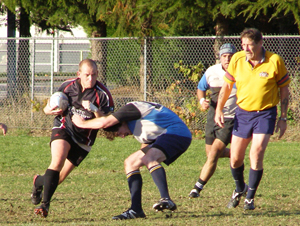 The recent spate of bad weather created turmoil for this past weekend’s Comox Valley Kickers play-off games. The Kicker Women had their Saturday game cancelled against the Velox-Valhallians in Victoria, but the Men’s team did manage to play its game on Sunday, however the result wasn’t what the locals hoped for.

With its other games cancelled, the Velox club had an overabundance of players clamouring for a game, and this led to the visiting Kickers being outnumbered and outgunned.
“They had a ton of guys,” said Kickers captain Greg Merchant. “Some of whom were from higher divisions than ours. Their backs were particularly good, so that when they got the ball and spread it wide, we were in a lot of trouble.”
In the end the Kickers lost 45-10 with the home team amassing five tries and four conversions for a 33-0 half-time lead. “The score doesn’t indicate how well we played,” continued Merchant. “I think that as a team we played one of our best game of the season. We rucked really well, we took very few penalties and the handling was so good we had very few knock-ons. We came close to scoring on a number of occasions in the first half, but just couldn’t get over the line.”
In the second-half the match was much more of an even contest with both sides scoring two tries, but with the Comox team showing great grit and determination in a much improved second-half performance. Flanker John Waters took the home side by surprise when he stole a ball right out of the hands of a Velox player and set off up-field. Stopped just short of the line, he linked with fly-half Doug Wynd who scored the Kickers first try and his second of the season. Towards the end of the game, prop Leigh Burley punched over for a try following a forward rush full of “pick-and-goes” that saw him score his third of the fall season.
At the post-match function the Velox players chose Doug Wynd as the Kicker’s “Best Back” of the match, and Andy Hextall as the “Best Forward” of the game. Both players have been outstanding all fall for the Kickers.
Both the Kicker Men and Women will take a well earned rest over the Christmas break before the Spring Leagues begin in February. Nevertheless, the players will continue to stay fit over the break as they work off their ‘Holiday Season excesses’ at Thursday night training sessions at their Fallen Alders facility. Should the weather ‘outside be frightful’ the players will move into the Fallen Alders hall where fitness professionals will lead them in strenuous exercise classes. Sessions begin at 6.30 p.m. on Thursdays. Everyone welcome.
SIDELINES:
The Kickers Rugby Club invites all those who are interested in playing rugby to attend training sessions on Tuesday and Thursday evenings at the club’s Fallen Alders facility on the Royston/Cumberland Road. Junior players take to the field at 5.30 p.m. and the Men and Women at 6.30 p.m.
The Kickers gratefully acknowledges our sponsors: Bayview Chiropractic, The Butcher's Block, Central Rentals, Continual Palingenesis - Social Media Solutions, Fluid Bar & Grill, Investors Group, The Le Fevre Property Group, Mount Washington Alpine Resort, Wedler Engineering, Pilon Tools and Yummies & Gyros without whose support rugby would not continue to flourish in the Comox Valley.