KICKERS HOLD ON FOR WIN 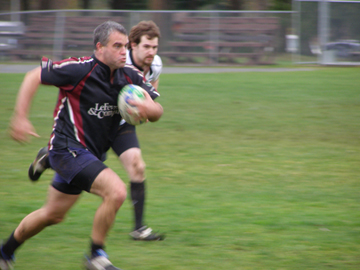 Spectators watching Sunday’s Kickers match at Village Park Cumberland against the visiting Port Alberni Black Sheep, chewed their fingernails nearly to the bone as they watched in suspense as the Kickers held onto a slim one-point lead hoping to stop a three-game losing streak. The Kickers did hold on, and the 25-24 win sees the local club sit in second-place with one game to play before Fall play-offs begin.

A brilliant run by prop Leigh Burley, right from the second-half kick-off, set up a peach of a try by #8 Andy Hextall to give the Kickers a comfortable 22-10 lead with a half to play. But following that try the Kickers managed only a penalty as the Black Sheep managed to climb back into contention with two converted tries, giving them hope of an all-important away win. Luckily for the Kickers, however, mid-way through the half, wing Steve “House” Jones kicked a splendid penalty goal from in front of the post that ultimately secured the victory for the locals.

The Kickers played some fine rugby on the way to this win. They rucked and mauled with authority; they retained ball in contact very well, and always seemed to be on the front foot most of the game securing seventy percent of the available possession. Their captain Greg Merchant enjoyed one of his best games in a Kicker uniform this season and with flanker Ben Travena laying on the “big hits”; with #8 Andy Hextall roaming with intent and Leigh Burley taking the ball forward every time he seemed to touch the ball, one wonders why the Kickers didn’t win this game by a much wider margin. But the Black Sheep had a number of “Flying Fijians” in their back line that caused the Kickers all sorts of trouble and they did most of the damage to keep the visitors in the hunt.
The Black Sheep opened the scoring with a try by Anthony Selva but Kicker lock Brandon Huddleston, who played a solid game, burst through after taking a ball from fly-half Doug Wynd. Huddleston went in under the posts for his first of the season giving Adam Erickson an easy conversion: 7-5. Shortly after, using his massive frame Kicker lock Andy Eaton went over in an unstoppable run for his first of the season giving the home side a 12-5 advantage. Ryan Waldruf replied for the Black Sheep, before centre Steve Hextall scored on a scything run to record his team-leading seventh of the season. 17-10 half-time.
Steve’s younger brother Andy put the Kickers twelve points up with his second-half opener and third of the season. Then the Black Sheep began their comeback with hooker Leighland Dumont, their Man of the Match, and wing Steve Sititiveni scoring. Final 25-24.
“It was a tale of two halves,” said Kickers Manager Aaron L’Arivee after the game. “Our forwards dominated all game long but their backs were hard to contain. We held our discipline right to the end and it was great to have twenty-two bodies ready to play at the beginning of the game. In the end everyone got to play and everyone contributed. A total team effort.”
The Kickers play a make-up game against Castaway Wanderers next Sunday in Victoria and until the final games of the Fall season are completed the play-off picture is unclear, however, with the Kickers in second-place a win would give them a home field advantage on November 18th in their first play-off game.

The Kicker Women traveled to Cowichan only to be dealt a 44-0 loss to the Piggies. “Even though we lost, it was still a fun game,” offered captain Aimee Burley.
The U-19 team traveled to Victoria to play Velox and ended on the wrong side of a 20-12 score. Trevor McGuire scored his second in as many games with Alex Holloway touching down for his team-leading sixth of the season. Tucker Tonko kicked a conversion.
[HTML1]
SIDELINES:
The Kickers Rugby Club invites all those who are interested in playing rugby to attend training sessions on Tuesday and Thursday evenings at the club’s Fallen Alders facility on the Royston/Cumberland Road. Junior players take to the field at 5.30 p.m. and the Men and Women at 6.30 p.m.
The Club gratefully acknowledges our sponsors: The Butcher's Block, Central Rentals, Continual Palingenesis - Social Media Solutions, Investors Group, The Le Fevre Property Group, Mount Washington Alpine Resort, Wedler Engineering, Pilon Tools and Yummies & Gyros without whose support rugby would not continue to flourish in the Comox Valley.