Kickers come out firing in Nanaimo! 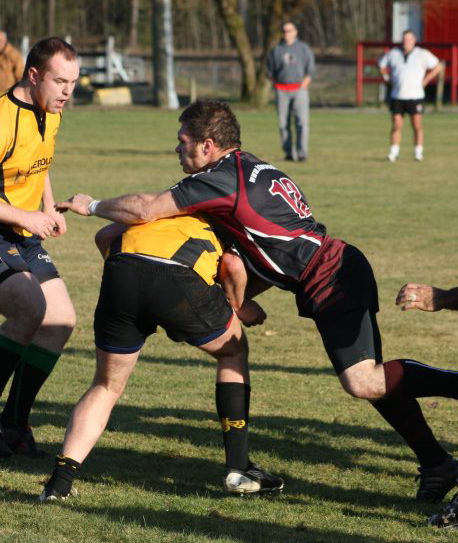 The 2012 fall rugby season has been frustrating for the undefeated Comox Valley Kickers men’s team, who have accrued almost as many wins by default as they have by actual games played. Sunday provided the opportunity for the Kickers to vent in a big way against the Nanaimo Hornets.

With an average age of 22 the Kickers started the game with what might be the youngest full set of forwards in the last six years so the stage was set for a fast rucking game.

The youngsters did not disappoint quickly gaining enough ground within a couple of minutes of the starting whistle to make room for veteran center Chris Ostertag to run in the first try. Following up almost as quickly was rookie flanker Brandon Krejci leaping over for five more points. Front row forwards Brandon Robertson and Brodie Squire kept up a barrage of bone crunching tackles creating turnovers and clearing the way for team Captain Andrew Hextal to range far and wide gaining huge yards and setting perfect platforms for structured play. Planned back line moves through several phases sent Leigh Burley over for the first of an impressive three tries in a row.

The Hornets rallied from time to time and despite sustained forward crashes and some brief backline forays
Nanaimo could not put points on the board. Instead the Kickers continued to pour it on with Nathan Holley bolting a full fifty meters before scoring a well deserved try.

In the early part of the second half the Kickers were somewhat slower putting points up until Chris Ostertag dropped four would be tacklers in succession with his devastating straight arm fend and went in under the posts for a second try. Leigh Burley, having a landmark game, shot through for yet another try, his fourth and more proof that he is a force to be reckoned with.

After making a number of textbook tackles Steve Hextall took possession and found space to run in a try of his own in the final minutes of the game. The closing try came, somewhat aptly, for Anthony McCaffrey. McCaffrey was
the architect of the game keeping the structure of the Kickers play sound and with five conversions put his personal score card at 15 points.