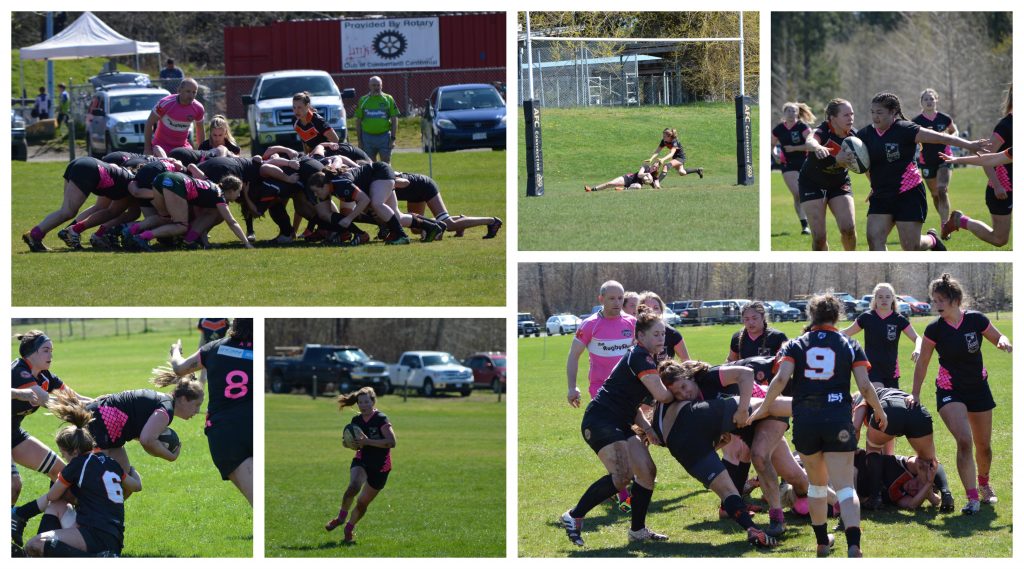 The Comox Valley Kickers Women’s rugby team had a dominating game in the first round of playoffs, knocking out the defending champions.

This past Saturday, the Kickers hosted Vancouver’s Meraloma RFC in the BCRU Division 1 quarterfinal game at Cumberland Village Park in front of a huge crowd of community supporters and fans.

The Kickers scored a frenzy of unanswered tries to start the game off strong. With the forward pack gaining the hard yards by crashing the ball and the back line utilizing the opportunities given, the Kickers were consistent in their offensive attacks throughout the whole game. There was a lot of back and forth action, but the Kickers demonstrated solid defense, only allowing one score against.

Inside Centre Natalie Nguyen and Flyhalf Paula Simpson both had a strong game with a hattrick of tries a piece with Outside Centre Daris Tendler and Winger Tanya Timmons each scoring once. Simpson was perfect with her kicks, adding 8 conversions. The final score was 56 – 5.

“We played with an intensity that was hard to match. We’ve improved from the last game as what we practiced on during the week, we executed during the game. Everyone did their job and contributed to the win,” said Kickers Captain Natalie Nguyen.

“Our back line had great line speed and ran our plays well which allowed us to exploit their defense. Once we were able to break the line, it was very difficult to catch us.  Our forwards were quick to the rucks and were strong in the scrums and lineouts. Overall, it was a very well-rounded game for us.  We need to continue this momentum heading into the semi-finals as Nanaimo are very tough opponents and we’ve split the series during the regular season. We have to stay hungry if we want to win.”

With winning the quarterfinal game, the Kickers are on the road to face off against #2 seed Hornets in the semifinals.  The game will kickoff at 11:15AM on Saturday, April 27th at May Bennett Pioneer Park. #4 seed Cowichan/Westshore will travel to #1 seed Abbotsford for the other semi-final game.  Winners of each of these games will head to the 2019 BC Rugby Club Finals taking place in Burnaby Lake on May 4th.  On the line is the opportunity to be named 2019 BC Rugby Club Champions.