Hornets get stung as the Kickers continue their winning streak! 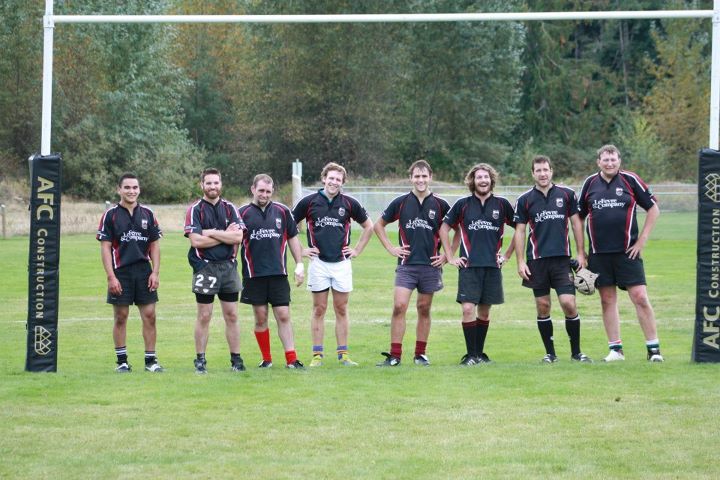 The Comox Valley Kickers continued the season’s winning streak with an impressive performance against the Nanaimo Hornets at Cumberland Village Park this past weekend. Dominating play with the strength of their forward pack the Kickers secured the majority of possession and crossed the tryline 9 times for a 51-0 victory. Kickers captain Tony Forth commented with a big smile that:  ”We all kept our mouths shut and did the work required to secure this victory. We’ve been training for this. Today we played together as a team and did it well and it paid off! Thanks boys.”

The team from Nanaimo, sporting many new faces, arrived early and looked fit and organised during their warmup. The Kickers team saw the return of some familiar faces and under confident leadership received the kick-off with enthusiasm which continued all the way through three fazes into an early score. The tone was set for the rest of the match as the boys in black kept pushing forward, both in scrummages and backline breaks.

Three of the returning players scored 4 of the 9 tries and each deserves special mention. Andrew Nikkel (wearing #6) received numerous kicks to start off new sets of play with intelligent running and strong defense that led to more than just the try he scored himself. Stephen Hextall returned to his outside centre position (and try-scoring streak) to outrun the Hornet defenders twice for some long-distance points. The Kickers would also like to thank Comox Valley Nissan for lending us Todd Stewart who scooped up a ball to power over the tryline and some defenders standing in the way.

Not to take away any of the recognition due to the rest of the team, who managed to put together a very cohesive and confidence-boosting victory. Stepping into the #10 position Mike Magee used his experience to direct play extremely well, often stepping through the holes this created in the opposition’s defensive line. He was later named Most Valuable Player in absentia and the cup was passed to Leigh Burley for his telling tackles and aggressive running. Inside centre Eli Cummins used his boots well, both to break through a gap for an excellent try and to secure 11 points by kicking penalties and conversions. Flanker Andrew Hextall stole many lineout balls and broke away from multiple scrums to gain valuable yards before setting up clean ball for the backline and making it across the tryline during one such play. Ultimately it was the Kickers’ team effort that proved too much for the visitors and it was a very frustrated Nanaimo Hornets team that left the field scoreless.

This victory places the Comox Valley Kickers comfortably ahead in the current BC Rugby Island 3rd Division and will ensure high spirits over the Thanksgiving break when the team enjoys a well-deserved rest.