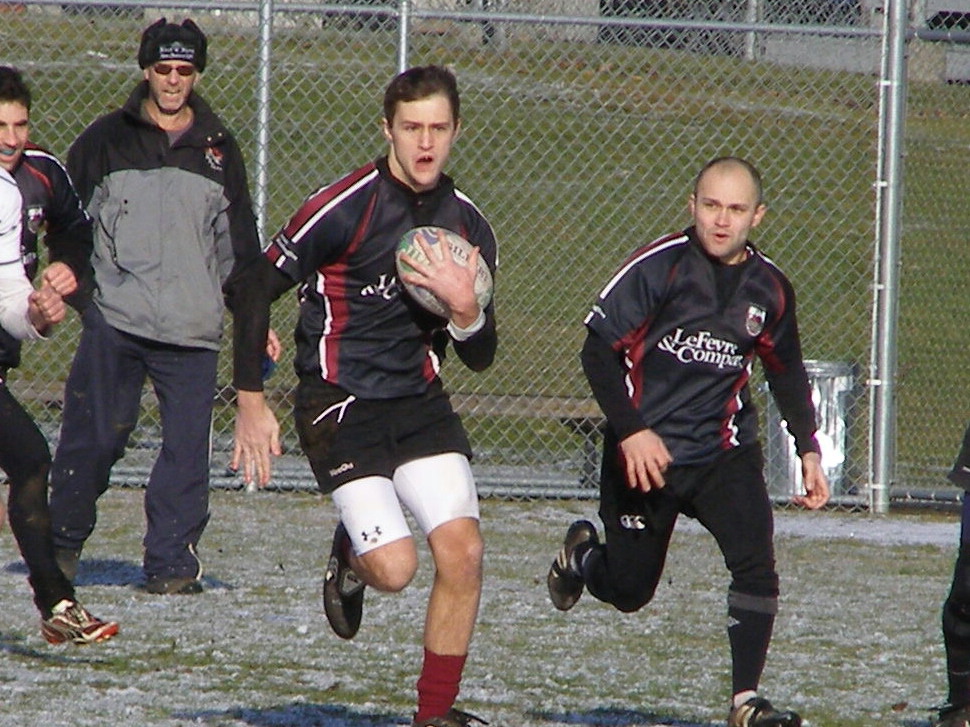 Two try scorer Andrew Hextall on a rampaging run against the Black Sheep in a recent match.

The Hextall brothers, Steve and Andrew, scored two tries apiece as they helped the AFC Construction Comox Valley Kickers notch a 49-10 win over Powell River last Sunday as the locals recorded their second win of the Spring season.
Perhaps because of the ferry ride across the Strait of Georgia, in the early part of the game, the Kickers experienced difficulty finding any flow to their game, but once they found their stride, about twenty minutes into the match, the tries kept coming. As well as the four scored by the Hextall brothers, captain Eli Cummins, prop Leigh Burley, lock Jeremy Grootendorst, and wings Tim Beggs — his second in as many games — and Pieter Voster also scored tries, with Cummins adding two conversions. The half-time score stood at 20-3.

Steve Hextall’s effort marked his fifteenth and sixteenth tries of the season and for younger brother, Andrew, his fifth and sixth as the two continue to play outstanding rugby for the Kickers. Both brothers learned their rugby in England and in their three years living in the Valley have set the standard for a “full-on”, committed approach to every match. Andrew, who plays flanker or lock, is constantly the first player to every breakdown and when he gets the ball in his hands heads in only one direction – right for the try line. Steve does much the same from his centre position but often finds more room to run because by the time he gets the ball he has a less cluttered field of play in which to run. Nevertheless, his determination and hard-running leaves opposition players unable to contain him.
“The Hextall brothers are a great asset to the club,” praised coach Aaron L’Arrivee. “They always offer a threat to the opposition and they lead their fellow players by example.”
“Sunday’s result doesn’t tell the whole story. Powell River played a tough game against us and more than once threatened our line. In fact, toward the end of the game they mounted a persistent attack that saw them score their only try. Full credit to the Hextalls, but I would also like to add that newcomers Logan Buchanan and Damian Kudoba played particularly well.”
The Kickers take on Castaway-Wanderers next Sunday at Village Park in Cumberland: 1 p.m. kick-off.

SIDELINES:
The Kickers Rugby Club invites all those who are interested in playing rugby to attend training sessions on Tuesday and Thursday evenings at the club’s Fallen Alders facility on the Royston/Cumberland Road. Junior players take to the field at 5.30 p.m. and the Men and Women at 6.30 p.m.