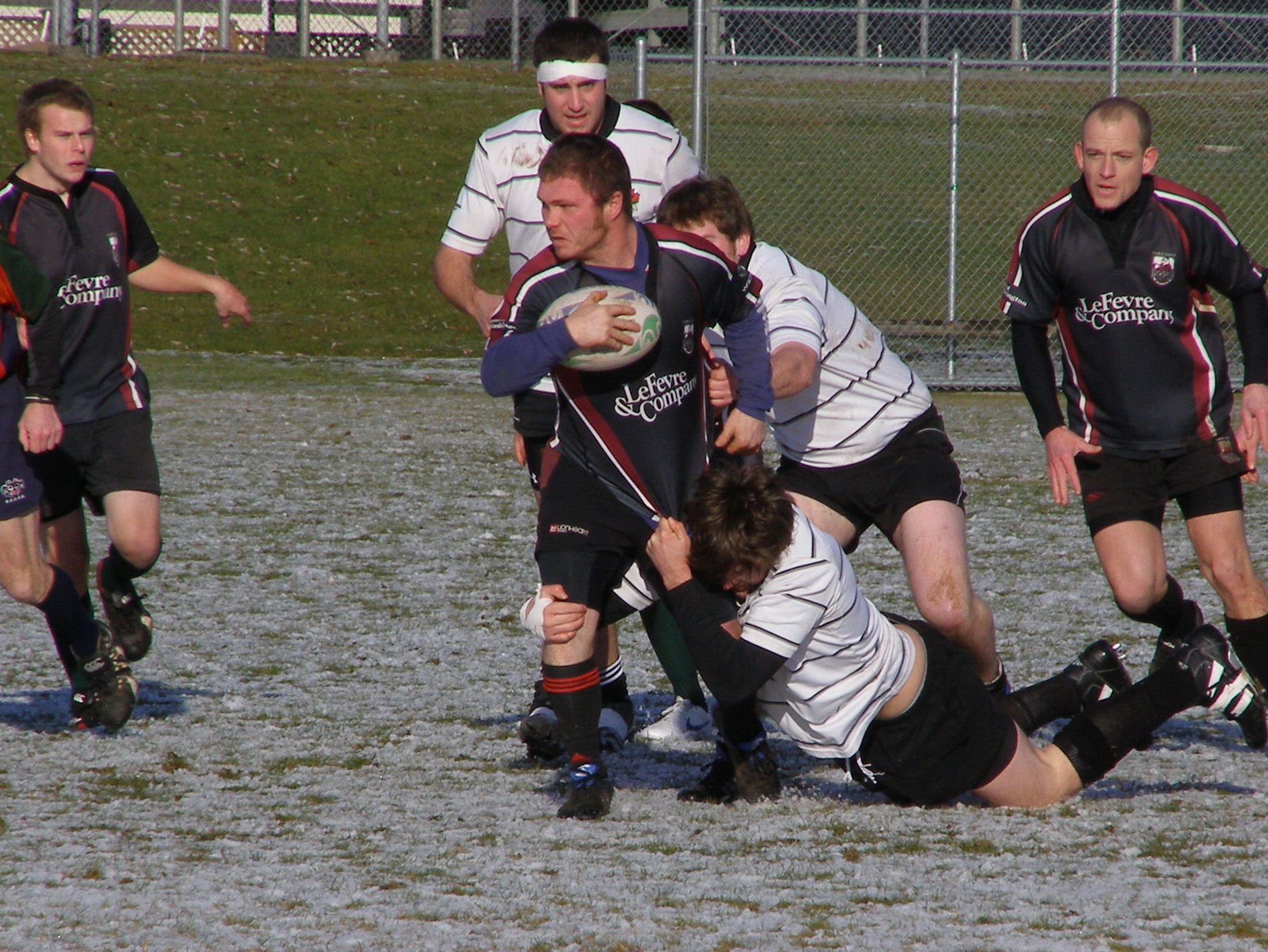 Leigh Burley in action on the snow

Rugby thrives on traditions, with some fixtures between clubs in Britain going back over one hundred and fifty years. On Saturday at Cumberland Village Park the Comox Valley Kickers and the Port Alberni Black Sheep began another tradition when the two clubs played for the newly inaugurated Beaufort Cup. The two clubs hope to play annually for this new Cup in a fixture that will include every level within their organizations and will be played on a total points basis on the day. In the first Annual Beaufort Cup only the Senior Men and the Senior Women played, but in future organizers hope to include Junior as well as Mini players.
Kickers “Mr. Everything”, Colin Chappell came up with the idea of the Beaufort Cup: “Just as the Beaufort Mountain range separates us, the Beaufort Cup will bring us closer together by holding this inter-club, “friendly” event to include every level of the two clubs,” said the former Bath player. “We have been trying to make this work for a number of years and have always fallen afoul of the weather, but today, in spite of a light dusting of snow, we finally held the first fixture. And, it proved a great success.”
The Black Sheep arrived with over forty players in their own club bus and soon the women’s team took on the Kicker women in a Seven-a side match. The Black Sheep eventually won five tries to three, 25-15 leaving the Kicker men with a ten point deficit to make up if they hoped to be the first holders of the Cup.
The men then took to the blue chalk-lined pitch – a sight seldom seen in rugby – on a venue that looked more amenable to having a snowball fight than a rugby match. The Black Sheep seemed to recover from their Christmas excesses far faster than the Kickers did, and soon held a 14-0 lead on tries by Lewis Mearns and Cody McLarey, both converted by Todd Daradics, before the Kickers got on the board shortly before half-time when Konrad Nikkel opened the door for Nathan Holley with a pretty little offload allowing the big #8 to romp over for a score under the post to make it easy for Eli Cummins to convert: 14-7 half-time.
The Black Sheep continued to pressure the home side in the second stanza crossing for three further tries by Joe Kaulagin, Ty Shannon and Ryan Turner with Todd Daradics converting two for a 33-7 win, giving the visitors an overall Beaufort Cup tally of 58-22.
After the matches all the players and supporters repaired to the Kickers Clubhouse at their Fallen Alder facility where the Kickers cook Steve Russell had prepared two turkeys, a huge roast of beef and a variety of salads for the hungry masses to demolish. “This has been a wonderful day and a great event to kick off the New Year,” commented Port Alberni’s Jan Purwal, the Black Sheep’s “Mr. Everything”. “ Last year twenty-eight of our club toured New Zealand during the World Cup and so this is a wonderful way to kick-off this year with a friendly event that will forge new bonds between our two clubs and continue to foster rugby in the North Island .”
“We obviously ate and partied more than the Black Sheep over the holidays,” said Kicker’s coach Aaron L’arrive. “They played very well today and we had trouble getting enough ball to work with. On the good side we were able to introduce three new players, a flanker, a prop and a scrum-half who have come down from Campbell River and want to play for the club. All good. This was a good warm-up for our first League fixture against Cowichan Piggies two weekends from now.”
So, the first Beaufort Cup will be recorded as a win for the men and women from the West Coast but, no doubt, as this new fixture continues on an annual basis, the real winner will be the “Great Game” of rugby as new traditions take hold across the Beaufort Mountains.

SIDELINES:
The Kickers Rugby Club invites all those who are interested in playing rugby to attend training sessions on Thursday evenings at the club’s Fallen Alders facility on the Royston/Cumberland Road at 6.30 p.m.

The club gratefully acknowledges our team sponsors, Investors Group and Wedler Engineering; along with our club sponsors AFC Construction and Continual Palingenesis – Social Media Solutions. Many thanks also to Bayview Chiropractic and Yummies & Gyros for their community way dollars (cw$) contribution. Without this support rugby would not continue to flourish in the Comox Valley.

Andy Hextall on the rampage