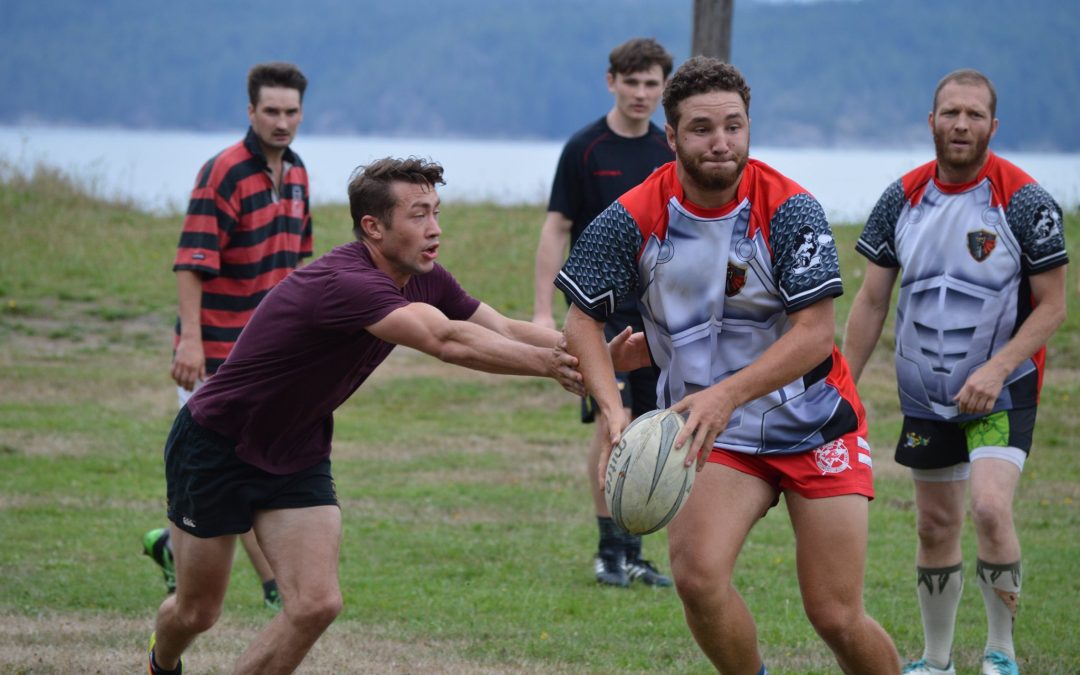 The Comox Valley Kickers Rugby Club is currently in the process of being sanctioned for Rugby Restart. This would mean holding in-person rugby activities that are done in a safe and responsible manner.

Once sanctioned, the Fall 2020 season will be an interclub Touch Rugby League.

• Play starts and restarts at the centre with a “tap”. This is performed by moving the ball on the ground with the foot, free from the hands, and then picking it up. Penalties are performed using the same procedure. On both a re-start and penalty the defending team must retreat at least 10 metres

• Six players are allowed on the field at any one time, with up to eight substitutes off the field. Reserves can be continuously substituted at any time from one side of the field

• A touchdown is scored by grounding the ball on, or behind, the try-line. One point is awarded for a touchdown

• A touch is legitimate and minimal contact between a player in possession and a defending player. A touch includes contact on the ball, hair or clothing and may be made by a defending player or by the player in possession. The referee is the sole judge of the touch and has the discretion to overrule a claim (so play to the whistle!). An attacking player may affect the touch by deliberately touching the opposition

• When touched, the player in possession must place the ball on the ground at the exact point of the touch. Play is re-started by stepping over the ball. It can be controlled with a hand or foot. This is known as a rollball. The ball may not roll more than a metre. A player may not perform a rollball unless touched

• The player picking up the ball (the half) may run, but if touched a changeover occurs. The half may not score and a changeover (rollball) will be awarded if this occurs

• After six touches with no score, possession changes. The attacking team begins play with a rollball

• During a rollball, all defending players must retire to the onside line set by the referee (at least 5m). The defending team cannot move forward until play restarts, nor interfere with play whilst retreating. A restart occurs the moment the ball is tapped (for a tap) or the half touches the ball (for a roll ball). Players may not delay the game by deliberately delaying a roll ball

• If the attacking player, when making a quick start, is touched by an offside defender, the referee may call for play to continue or give a penalty tap

• When a rollball is taken within 5 metres of the scoreline the defending players must retreat with both feet to behind their scoreline before they can make the touch. If a player is touched in the touchdown zone before grounding the ball the touch counts and play is restarted on the 5-metre line

• If the ball is dropped or if a player crosses the sideline before being touched, a change of possession will occur

• A penalty is awarded for infringements including: forward pass, offside play, performing a roll ball over the mark, claiming a touch when none was made, using more than minimum force to make a touch, interfering with the roll ball and passing the ball once touched. When a penalty is awarded, the referee will give the mark where the Tap Ball must be taken and set the onside line for the defence (at least 10m)

• If the defending team unsuccessfully intercepts the ball or it is intentionally knocked down, the attacking team restarts their possession (‘six again’)

• No obstruction, excessive contact, verbal abuse or foul play will be tolerated – the referee is sole judge. A penalty will be awarded in such cases and players can be removed from the field. Serious or continual foul play of any nature will result in the player being sent off without a replacement

Information on the Return to Rugby plan for players, coaches, referees and club leaders can be found at bcrugby.com/returntorugby.