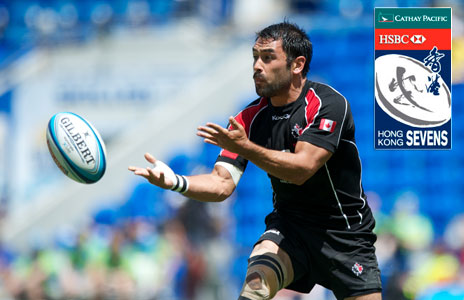 VANCOUVER - Our senior men’s national sevens team is back on the IRB Sevens Core Circuit and from March 22nd-24th will be competing in the world’s most popular sevens tournament - the Cathay Pacific-HSBC Hong Kong Sevens.

Hong Kong Stadium - a 40,000 capacity facility that overlooks Causeway Bay - has been home to some of Canada’s top performances in recent years. In 2011, Canada beat Japan 33-12 to win their second straight Bowl Championship. Duke was again at the forefront of Canada’s offence, pacing the Canucks with two crucial tries.

Back to reassert himself as one of the Circuit’s elite players this season is 2011 7s player of the year and Victoria product Phil Mack. Fellow BC reps crashing onto the international scene include 18-year-old BC Elite Youth Sevens phenom Justin Douglas of Abbotsford and former Canada U20 captain Harry Jones of North Vancouver.

For Canadian rugby fans looking to see our national team cement their place as an elite squad in front of 40,000 fans, Cathay Pacific is offering a limited number of Fly’n See packages for departures from Vancouver or Toronto to Hong Kong, including a 3-day tournament pass. Some restrictions apply. For more information and to book your Hong Kong Rugby Sevens Fly’n See packages, call Cathay Pacific Reservations at 1.888.678.9978 or visit http://www.cathaypacific.ca/offers/HKGrugby7/subdefault.asp

Economy Class Fly’n See packages from as low as $1,451, or for greater comfort and style, fly Premium Economy Class with packages starting at $2,514. All of the 2011-23 packages sold out well in advance of the tournament so act fast to secure this year’s deal!