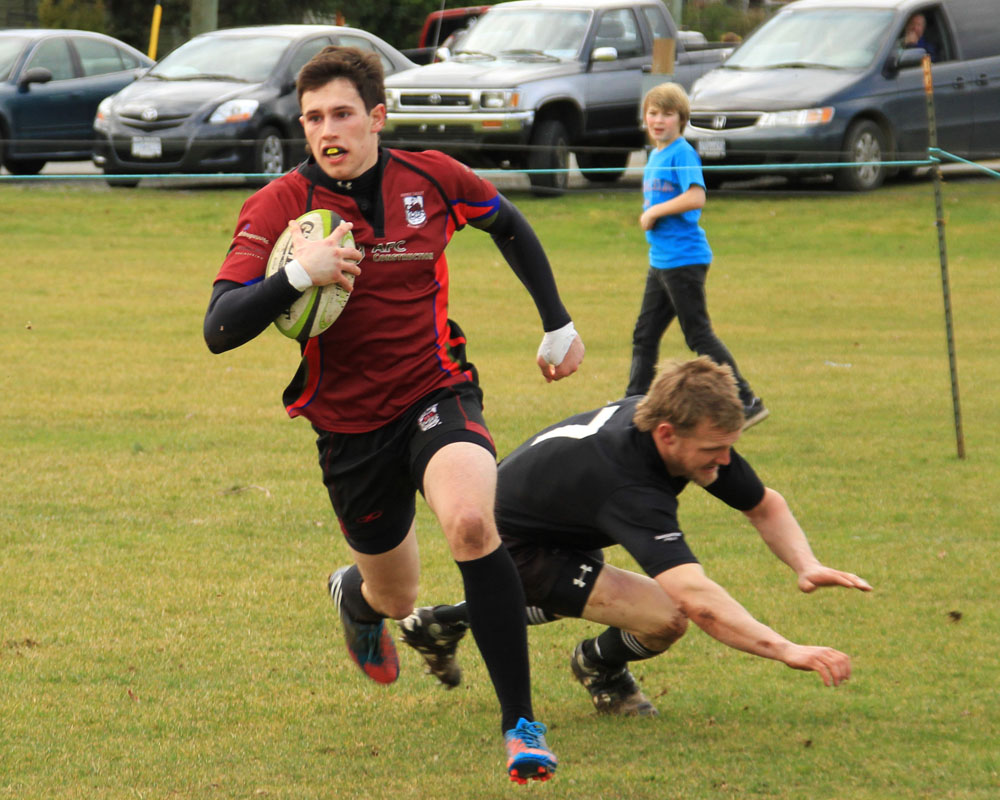 Under sunny skies in Cumberland, the Comox Valley Kickers challenged Beaufort Cup rivals the Port Alberni Black Sheep in a 1st division match on Saturday. The home town Kickers would work hard to come out on top of a 43-7 victory, bringing their record to 1-1 this season in VIRU competition.

Andrew Hextall fends off a Port Alberni player on Saturday in VIRU action. Hextall would score 2 tries in his team’s victory in the 1st division on Vancouver Island.

Brothers Andrew and Steve Hextall of the Comox Valley Kickers started the day out playing side by side at Inside and Outside Center. Both players would score 2 tries a piece and were key contributors in their team’s victory. They would dominate the back field until just after the 40 minute mark. Coach Frank Blaucomb would move Andrew to the flanker position to finish off the game. The change in position would not affect the young Kickers captain as he would continue to lead by example and play his role to perfection.

Andrew Hextall on the ground passes to brother Steve. The brothers Hextall would combine for 4 tries in Cumberland on Saturday.

Rookie winger Brandon Krejci of the Kickers was sporting his snazzy new French hair cut,  and seemed to have found his step while evading defenders. Krejci would score a beautiful 50+ yard try down the sideline putting all his magical moves together in his first try playing 1st division rugby. The “kid with the mullet” would win man of the match for the Kickers after showing incredible confidence in his play.

Kickers winger Brandon Krejci outruns an Alberni tackler on his way to his first try for the Kickers in the 1st division.

Konrad Nikkel, returning from playing representative rugby with the Crimson Tide, distributed the ball effectively with well executed passes. Sending the ball sideline to sideline would wear down defenders and open holes for the harder players to run through. Nikkel would score a try himself after stealing the ball at the back of a ruck the Kickers did not have possession of, and going in untouched just to the left of the posts.

Konrad Nikkel distributed the ball well and orchestrated a 43 point attack by his team against the Black Sheep. All the Kickers backs would register points in this big win for Comox Valley rugby.

Before the final whistle could sound the Kickers would maul the ball into goal, and touch it down for the Kickers’ final try of the day. The referee appeared to have trouble seeing if the ball was grounded, but in the end it was deemed a try to the Black Sheep’s dismay with winger Leigh Davidson getting the official tally.

Ben Travena was sent off with a yellow card for defending a team mate with 6 minutes remaining in the game. Trevena would control the ball in the lineout well for his team making the calls and executing with efficiency until his unfortunate departure.

Ben Trevena supports team mate Andrew Hextall in the tackle. Trevena would receive a yellow card with less than 10 minutes left to play.

Playing a man short the Kickers did concede a try just shy of the whistle to the Black Sheep. It was an easy conversion for Port Alberni kicker Todd Daradics.  Daradics received man of the match honors for his efforts this day. He moved and the ball well and evaded Comox’s pressure as best he could. That left the final score 43-7 in favour of the home team.

Port Alberni Black Sheep fly half (#10) Todd Daradics was chosen as man of the match against the Kickers.

Next Saturday the Kickers rugby club would like to invite all fans and supporters of rugby in the Comox Valley to come out to the clubs first double header in over a year. The 2nd divison women’s team will host United at 11:00am in Cumberland Village Park, and the Mens 1st division team will kick off to the Cowichan Piggies at 1pm, same location.